I know I'm starting to sound like a broken record by now but food fans in Miami really need to take advantage of the fantastic visiting pop-up chef series hosted by Michael Schwarz at Harry's Pizzeria.  These dinner are a collaboration between the visiting chef(s) and the outstanding Michael's Genuine Food and Drink/Harry's Pizzeria teams led by rising star chef, Bradley Herron.  One of the best sommeliers/wine directors in town, Erik Larkee is always on hand pouring generous amounts of perfectly selected wine.  I think it's fair to assume that these dinner would not happen without the assistance of the savvy Genuine Hospitality Group brand manager, Jackie Sayet and Michael's camera toting assistant Ellie Groden.  And the actual dinners always run smoothly thanks to Harry's manager Simeon Humphreys and his professional and friendly staff.

As I've previously advised, the dinners feature great food, wine and are "genuinely" a lot of fun! Plus, some of the top chefs from across the nation are delivered to our backyard.  No, these dinners are not inexpensive but they are a fraction of the cost of air fare and a hotel room.

The 2012 series saw several prestigious chefs work the wood burning oven of Harry's.  I was fortunate to attend dinners hosted by Jonathan Waxman, Marc Vetri, Jonathan Sawyer, Jon Shook and Vinny Dotolo, Chris Hastings, Hugh Acheson and Andrew Carmellini. Each of these dinners featured great food that showcased each chefs style. So I was very happy to hear that Chef Schwartz was continuing the series in 2013.

The 2013 series is off to an incredible start thanks to the five star meal served by Paul Kahan and one of his many protégées, Cosmo Kramer Goss.  On deck is the British superstar April Bloomfield from the The Spotted Pig in Greenwich Village.  Rumor has it this one will be a nose to tail extravaganza. Boom!

Paul Kahan's culinary career started as a child assisting in his father's delicatessen and smokehouse in Chicago.  After working as a computer scientist he returned to the food world and spent fifteen years working under Erwin Drechsler at the recently closed erwin and Metroplis.  Subsequent to that, he spent time working with Rick Bayless at Topolobampo.

In 1999, Paul opened his first restaurant Blackbird and quickly made Food and Wine Magazines best new chef list.  Fast forward to 2013.  He now owns an empire in the windy city with Avec, The Publican, Publican Quality Meats, Big Star and The Violet Hour in addition to Blackbird.

Along the way, he has received numerous accolades including James Beard Best Chef of the Midwest in 2004.  He followed that up with a James Beard nomination for Outstanding Chef in 2007.

Cosmo is the head of charcuterie at Publican Quality Meats and made Zagat's "30 under 30" list for Chicago in 2012.  He appears to be on the culinary fast track and should have a comfortable home in the Kahan stable.

Unfortunately, this was my first experience with Paul.  I've only been to Chicago one time and his restaurants were on the short list but were unwisely bypassed for Achatz, Elliott and Bayless spots.  Now that I have finally enjoyed his food, I won't make that mistake again.

After the pop-up I was fortunate to spend some time with Paul and his lovely wife Mary at The Broken Shaker.  They were super cool and friendly even though  they were talking to a food "booger".

I've been checking my calendar all week for some free time to visit Chicago.  This time, I'm doing the Kahan trifecta shuffle, Blackbrid, Avec and The Publican plus cocktails at The Violet Hour.  Go check out those menus but put a bib on first. 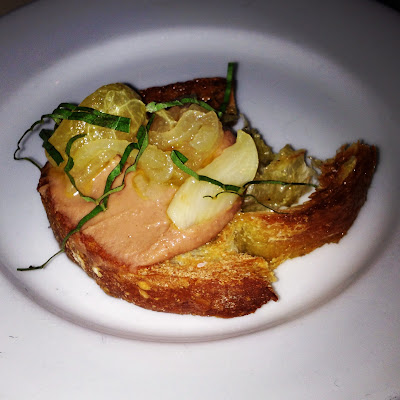 The first bite of the night was an insanely good chicken liver fettunta with satsuma and chili agridolce. The creamy liver topped with tasty onions was one of my favorite bites of the night. 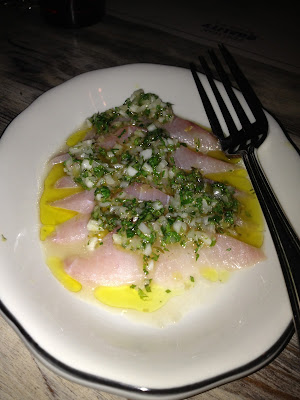 A fresh cobia crudo was served next. It was paired with a local kohlrabi and a very tasty mint salsa verde. 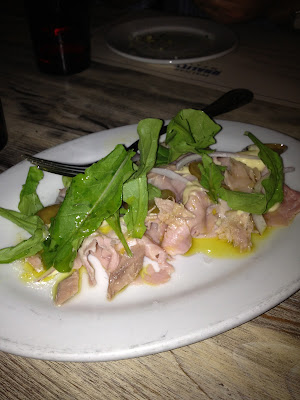 Not pictured was a great Avec Delux Focaccia with truffle and taleggio cheese. 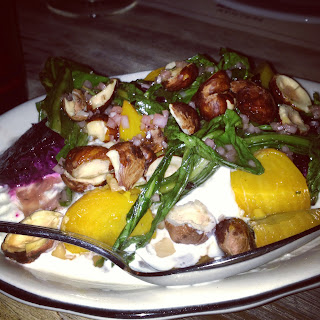 Cheese fans in general and mozzarella fans specifically were in heaven with Kahan's super stracciatella with roasted baby beets, Oregon hazelnuts, dandelion greens and aged balsamic.  This was a tremendously tasty dish with great textures. 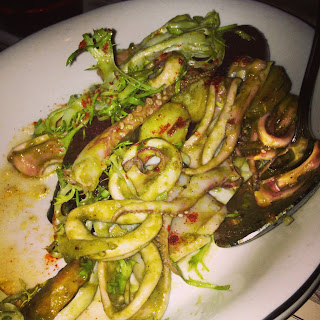 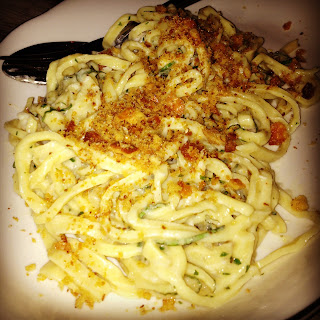 Pasta "alla Chitarra" provided a great balance of flavor and texture thanks to the combination of Spanish mackerel, chili and crunchy breadcrumbs. 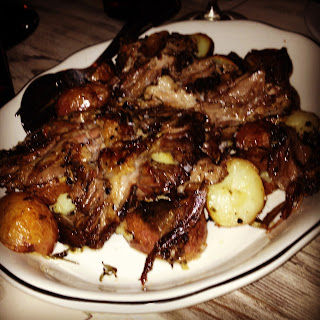 The hits kept coming. The next home run dish featured a deliciously crispy and tender lamb shoulder cooked with anchovies and chilies. Rosemary potatoes were a perfect complement. 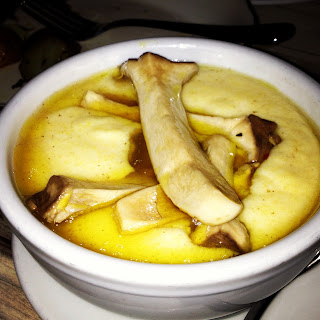 The lamb was paired with a wonderful combination of creamy polenta and mushroom sott'olio. 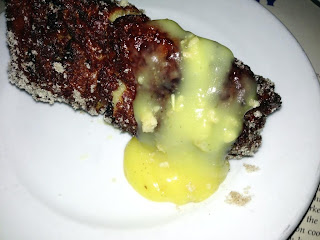 Dessert was via Hedy and featured a panettone pan perdue with Meyer lemon curd.


We're only halfway through January but the bar was set very high for best meals of 2013.  Kahan will be hard to beat.  But I suspect April will have something to say about that next month.  See you there!