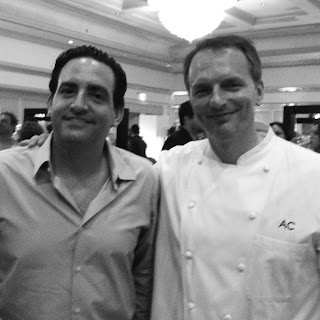 For those of you that are unfamiliar with Cobaya Miami it is an "underground and experimental" dining group that my friends' Food for Thought Miami, Blind Tastes and I have been organizing for the past three and a half years in Miami.  The primary goal of these dinners is to provide chefs with a platform to take their handcuffs off and cook some creative and delicious dishes that they don't get to do on a typical day for a room full of rabid guinea pigs.

When Andrew and his team expressed interest in hosting a Cobaya dinner, we jumped at the opportunity.

There really isn't a whole lot for me to say about this dinner in addition to my initial post below other than that it was FREAKING AWESOME from start to finish. First class chef, first class food, first class wine, first class service and a first class atmosphere made this an easy choice for Best Meal of the Year.

Every bite and dish was great yet surpassed by the next one.

We were treated to four delicious canapés  followed by four fantastic courses highlighted by a fabulous foie gras meatball and quite possible the best dish of the year, a Lake Meadow Egg, Smoked Sable and Trout Roe. Insanely good!

But Carmellini and crew were just getting starting.  They followed that up with one of the best fish dishes of all time, Turbot Cuit Entier Sur L'Os Aux Saveurs Marocaine (translation- fucking delicioso)

The Dutch Boys had more tricks up their sleeves. Yes, enter a whole hog cooked several ways AND paired with numerous tasty sides. (scroll down for more details)

The savory boys weren't having the only fun. Josh a/k/a The Grip dropped an amazing dessert bomb on us including an old school Croque en Bouche Royal.

The service was as good as it gets and the setting was picture perfect.

Thank you to the entire team at the Dutch for making this an incredible night.

The best part of this unreal meal was being able to experience it with 30 amazing guinea pigs in the house.

*Further evidence at how awesome this meal was is the fact that several die hard Celtic and Heat fans in attendance didn't leave their seat to watch any of the pivotal playoff game that was going on until the dinner ended.

The Dutch turns out incredible food on a daily night so I would highly recommend paying them a visit.


How does a food fanatic (me) respond to a tweet from a chef who has won two James Beard awards, earned a Michelin star, received three and four star reviews from the NY Times and also happens to be a Knick and Yankee fan???

Big no huge thanks to Chef Carmellini for taking the time out of his busy schedule (Locanda Verde, The Dutch nyc, The Dutch Miami plus Sausage Boss at the Mecca-MSG) to fly down to Miami and host a kick ass Cobaya dinner.


The Dutch in Miami is clearly in good hands when he is not in town. It is manned by Chef de Cuisine Conor Hanlon and Pastry Chef Joshua Gripper. Chef Hanlon was previously executive sous chef at db Brasserie in Las Vegas for two years before heading to Miami to become executive sous at db Bistro Moderne.

Chef Gripper worked under Chef Carmellini at Cafe Boulud followed by a stint as pastry chef at db Bistro Moderne. He rejoined him at A Voce and moved on to Daniel when Chef Carmellini left. His first job in Miami was at Gotham Steak before joining forces with Chef Carmellini again at The Dutch.

I obviously had very high expectations going into this Cobaya and Chef Carmellini and crew easily surpassed them. I'm not going to bore you with a description of each course and will simply let the menu and photos speak for themselves. What I will tell you is that this was a fantastic meal in every way from start to finish including several holy sh-- that was great moments.

This was a special treat and one of the most enjoyable overall dining experience I've ever had. 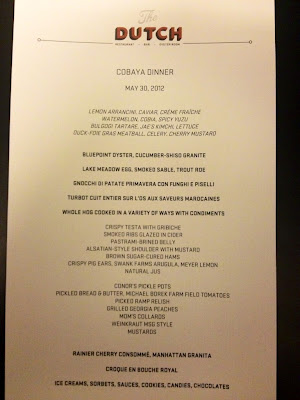 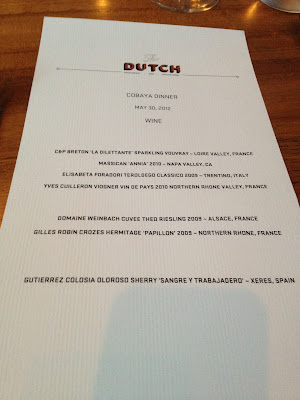 Sommelier Nicholas Abuabara poured some really great wine all night that paired nicely with each course. I enjoyed hearing him explain each selection along with his rationale for the pairing. 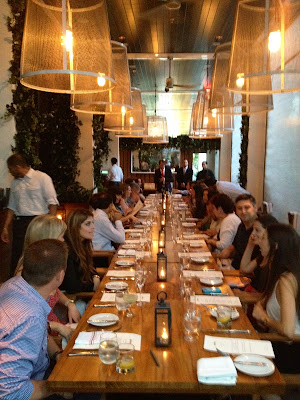 Great table out on the terrace featuring 30 guinea pigs. 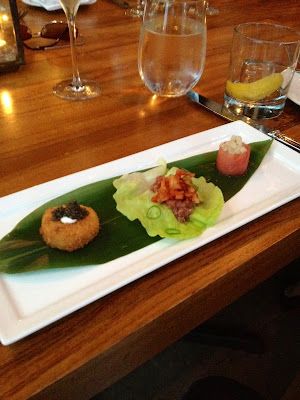 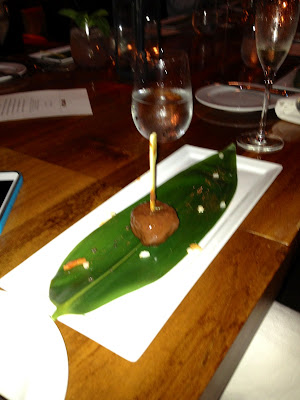 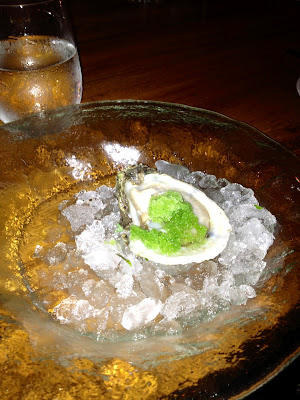 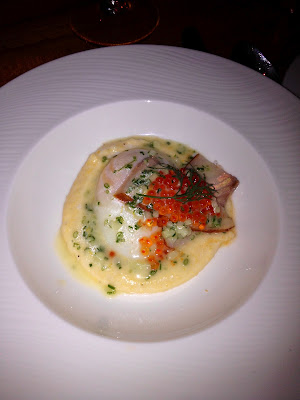 Holy sh-- that was good moment #2 coupled with a holy sh-- that may have been the best thing I ever ate. Words cannot describe... Lake Meadow Egg, Smoked Sable, Trout Roe 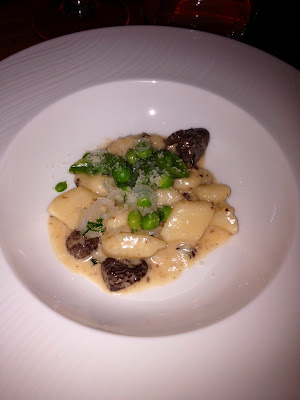 The night would have been incomplete without sampling some pasta Carmellini... His Gnocchi di Patate Primavera con Funghi e Piselli didn't disappoint this pasta lover. They were light and perfectly cooked. 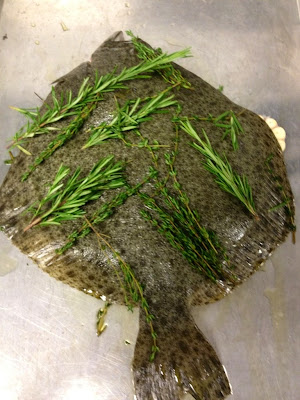 A whole wild turbot in the locker room prepping for tip-off. 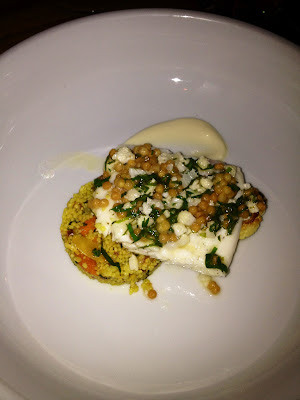 An AC two handed jam!! Holy sh-- that was great moment #3 and another dish of all time caliber offering. Turbot Cuit Entier Sur L'Os Aux Saveurs Marocaine (translation-delicioso) was packed with great flavors and melted in your mouth. 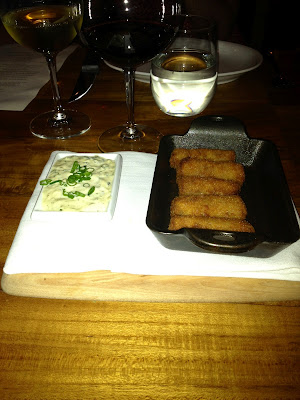 Next up was the notorious whole H.O.G. Piggie Smalls (50 lbs) was prepared several ways by Chef Carmellini and Conlon. We got to tackle this bad boy for life head first and on the crispy side.
Crispy Testa with Gribiche. 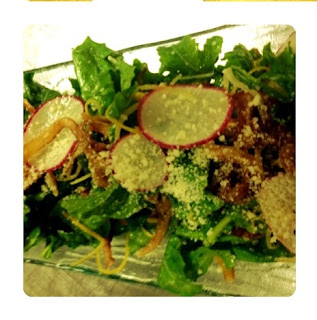 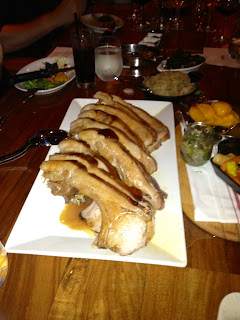 Piggie threes moves hypnotized me. It featured insanely good Smoked Ribs Glazed in Cider. Holy sh-- that was great moment #4 and another dish of the year candidate. 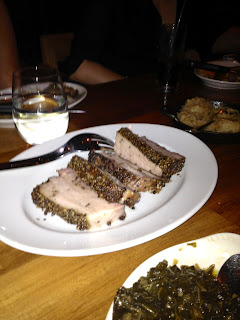 Chef Carmellini went Carnegie Deli on us with a Pastrami-Brined Belly. I'm a huge pastrami and pork belly fan so this really hit a sweet spot. The pastrami may have been a tad overpowering for some but that belly was a fatty-licious treat. 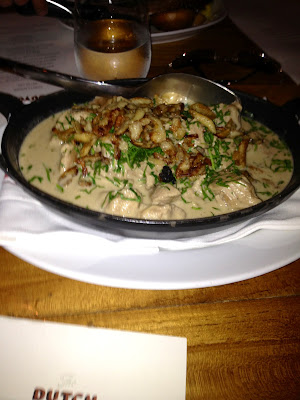 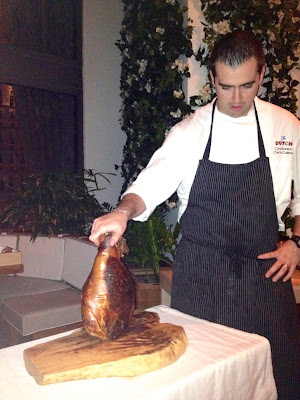 Chef Hanlon posing with one of the Brown Sugar-Cured Hams 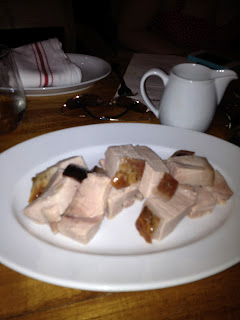 Brown Sugar-Cured Ham sliced and waiting for the au jus. Ham doesn't get better than this. 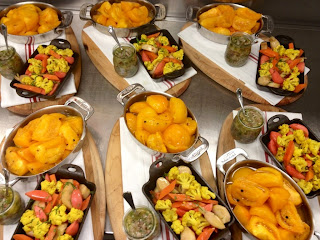 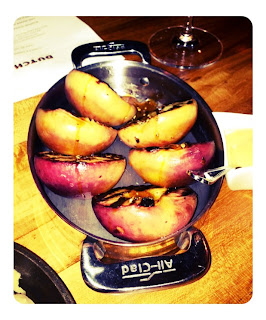 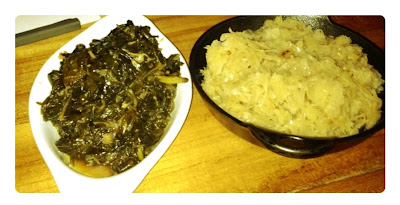 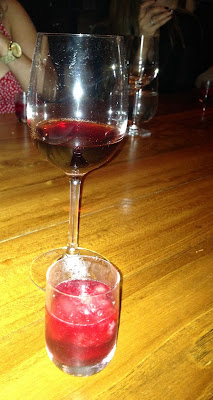 Rainier Cherry Consommé, Manhattan Granita paired with a great barolo which was a last minute audible by Nicholas. This was a nice transition from savory to sweet. 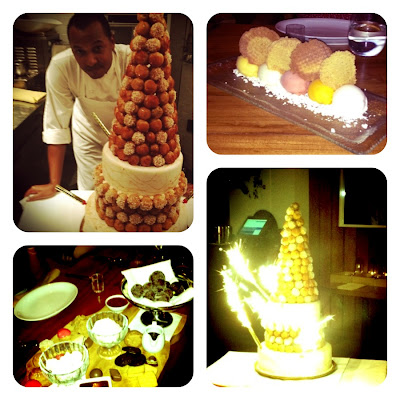 Dessert was far from an afterthought. Chef Gripper dropped a dessert bomb on us with an old school Croque en Bouche Royal. Holy sh-- those little puffs were great. We were also treated to an assortment of awesome Ice Creams, Sorbets, Sauces, Cookies, Candies, Chocolates. This was a fantastic finish to a perfect evening.

Additional thanks to Jacque Burke, Katya Segovia, Joe Weiss, Seth Alexander and The Dutch team for helping make this a special night. The setting and service was first class all the way.

Do yourself a favor and go check out what's going on over at The Dutch. And save room for dessert!!!