I know you've heard it from me before here, here and here.  But I'm going to go ahead and tell you again.  Brad Kilgore is going to be a superstar.  Write his name down, save this post or even better, go take out a loan and invest in him.  Brad has an amazingly creative culinary mind AND is capable of executing his creations at a very high level.  And at just 26, this is just the tip of the iceberg.

Brad recently left his position as executive sous chef at Azul in the Mandarin Oriental in order to pursue other ventures.  He's in between gigs right now but has some private pop up-esque dinners in the works.  You do not want to miss these.

My sources have indicated that the next dinner will occur on February 7 with another popular local chef. It will be a little more straightforward than the tasting menu I just enjoyed but it should be great nonetheless.

Save the date and stay tuned for further details. 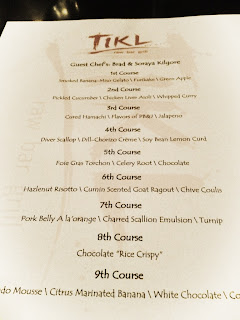 Tikl raw bar grill graciously played host to Brad and Soraya Kilgore's nine course tasting menu on January 23, 2013.  Brad and Soraya are married and Soraya was recently a pastry chef at The Setai.  Also on hand was Tikl sommelier, Claudio Giordano Jr. who did an excellent job pairing great wines with each course.  Claudio apparently spent the early part of the week tasting each sauce repeatedly. 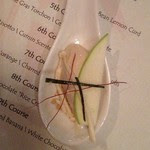 Our first bite featured a savory not sweet banana-miso gelato with furikake, green apple and bee pollen.  I appreciated the savory attempt at ice cream but the overall dish was the weakest of the night for me. 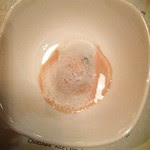 However, dish number two, pickled cucumber with chicken liver aioli and whipped curry was a home run.  Here, Brad pan seared the chicken liver in butter and thyme and cooked it until it reached medium. He then combined the liver with an aioli base of raw garlic, grape seed oil plus white soy sauce. Those components were paired with a pickled cucumber and topped with Gorgonzola dolce. 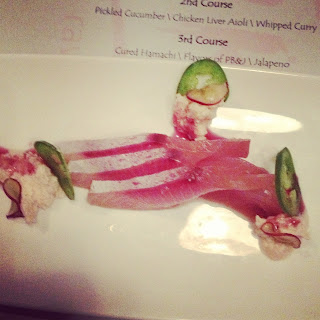 Next was a seafood riff on everyone's youthful favorite PB&J.
Brad plated three pristine slices of  raw hamachi which were cured for thirty-six hours in concord grape jelly, red miso paste and paired with a whipped peanut butter emulsion and topped with a palate cleansing jalapeno. 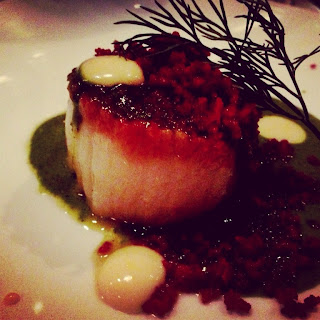 The dish of the night, a perfectly seared diver scallop paired with a delicious chorizo and dill creme plus white soy.  It was topped with chorizo crumbs which added some tasty texture. 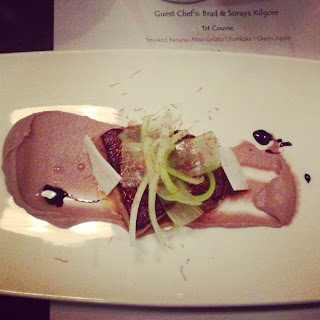 More hits were on the way.  A delicious seared Hudson Valley foie gras was topped with celery root and coupled with a malted chocolate. 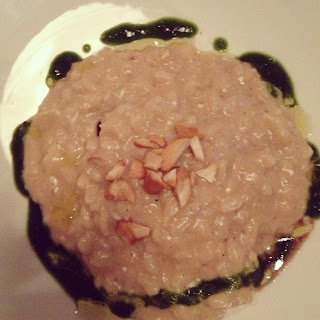 A rich and satisfying hazlenut rissoto with a cumin scented goat ragu and cashews arrived next.  A garlic chive coulis surrounded the dish. 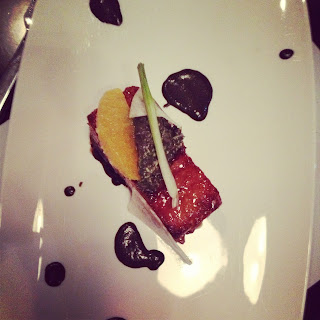 Another standout dish was Brad's take on Duck a la 'orange.  Brad opted for a wonderful cut of a pork belly in lieu of duck.  The belly was cured for twenty-four hours then slow braised in orange juice and chicken stock. After hitting the fryer it was glazed in caramel. A burnt scallion emulsion rounded out this incredibly delicious dish.
. 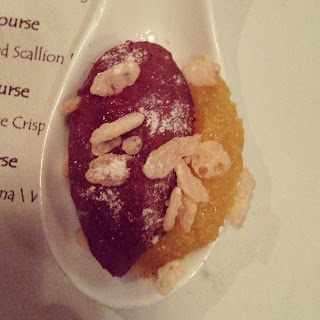 Brad handed the spatula to his lovely and talented wife, Sayora.  First up was a playfully rich chocolate "rice crispy." 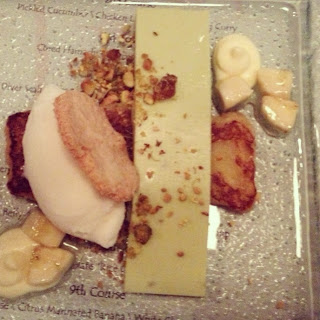 She ended the meal on a real high note with a delicious and creative combination that included an avocado mousse, citrus marinated banana, white chocolate and coconut French Toast.

Wow! We are still in January and I've already enjoyed three meals that are meal of the year caliber thanks to Micah Edelstein at neMesis Urban Bistro, Paul Kahan via his Harry's Pizzeria pop-up and now Brad and Soraya.   2013 is looking great.
Posted by The Chowfather at 11:03 AM