When Michael Schwartz announced that Harry's Pizzeria was going to host a series of pop-up dinners with visiting chefs who were promoting new cookbooks, I thought it was a great idea and a cool concept.  When I saw that Jonathan Waxman was going to be one of the featured chefs, I wet myself.  Okay, not so much but I was very excited to see his name on the list and I couldn't wait for tickets to go on sale.  I became a big fan while watching him on season two of  Top Chef Masters and have wanted to pay a visit to his popular West Village restaurant, Barbuto. 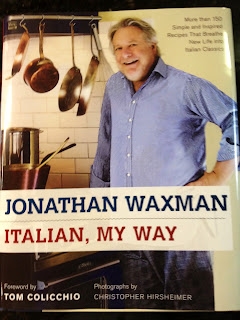 Chef Waxman didn't come to town trying to "hawk" his new cookbook Italian, My Way by making the customary rounds at local book stores. No, he rolled up his sleeves and hit the wood burning oven at Harry's and I'm glad he did.  Thus, let me share some inside information with you.  Italian, My Way contains more than 150 simple and inspired recipes that breathe new life into Italian classics and can be purchased on Amazon for the low price of $19.15.


For my non food obsessed followers, chef Waxman started his culinary career in San Francisco at the prestigious Chez Panisse where he was a protégé of Alice Waters. He subsequently did the West Coast/East Coast thing for several years before opening Barbuto in 2003.

If you don't know who chef Schwartz is and you reside in South Florida, please stop reading this now and run over to one of the best restaurants in town, Michaels Genuine Food & Drink.

On February 1, 2012 chef Waxman along with help from chef Schwartz, chef Herron and the Genuine team, wowed 30 or so guests with dishes primarily featured in his new book. The food may use simple ingredients and be prepared in a straightforward manner but it is executed flawlessly and packed with delicious flavors in every bite.  This is seriously kick ass cuisine.

Chef Schwartz and crew were #1 on my Top Meals of 2010 list and I anticipate that this meal will end up very high on my meals of the year list for 2012. 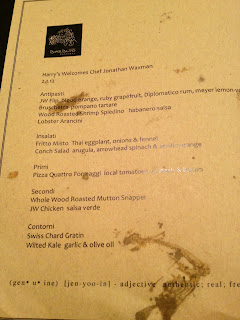 This pop-up was broken down into four courses plus antipasti and contorni.  The food was appropriately  served family style which I enjoyed.

Before eating we were served a JW Flip comprised of blood orange, ruby grapefruit, Diplomatico rum, meyer lemon-vanilla syrup.  This was as good as a pink drink gets, not that I've had one before.


The first morsel of food I sampled was a crunchy bruschetta topped with a soft, fresh and nicely seasoned pompano tartare. This was a great first bite but the next one, a wood roasted shrimp spiedini delivered the first "holy shit that was good" moment.  The plump shrimp were perfectly cooked on skewers and seasoned with an awesomely spicy habanero salsa that walloped my taste buds.  This spicy bite will undoubtedly make my top dishes list for 2012.

The final antipasti was a lobster arancini that was good but outshone by the shrimp spiedini.

I'm not a huge fan of fried food these days so I wasn't overly excited about trying the fritto misto. However, Chef Waxman's version had a crisp subtle batter that complemented the fresh Thai eggplant, onions and fennel rather than overpower them. This was surprisingly enjoyable and a dish I found myself reaching for more.

The last insalati was a salad that I could live on.  It featured conch, arugula, spinach & Seville oranges. The conch was outstanding on its own and paired with impeccably dressed and seasoned greens which made it difficult to put your fork down.

As most of my followers know, I'm a huge pizza fan and was thus excited to try chef Waxman's pie.  He served a quattro formaggio, with local tomatoes, spinach, and bacon.  I can't tell you what the four cheeses were but I can tell you that this was a fantastic pizza.  The dough had a tasty chew and a perfectly crisp crust. The toppings were fresh and paired well together. Normally, the presence of bacon dominates the flavor of a pie but there was just a hint of it here. The cheese to dough to topping ratio was ideal and resulted in a knockout pie. On a side note, I'd love to know if he packed that dough in his carry on or used Miami tap..?? Regardless, I hope he left the recipe at Harry's.


The last main plate was the JW chicken al forno with salsa verde. This was one of the best chicken dishes I've ever had.  The Chicken was roasted perfectly in the wood oven resulting in a really crispy skin yet full of  tender and succulent meat. It was topped with a salsa verde that was even better than the bird.  Everything should be topped with some Waxy verde. He should jar that stuff.


Chef Waxman continued his battery on my taste buds with a moist and meaty Mutton snapper that was  roasted whole in the wood burning oven. I'm not exactly sure what the snapper was stuffed with prior to roasting but the result was awesome and even better than the chicken.

Side dishes consisted of a wilted kale with garlic and sea salt and a delicious Swiss chard gratin.


The evening ended with a nice trip down the sweet side of Italy via a passion fruit coconut semifreddo and biscotti.

This dinner was a real treat.  It was perfectly paced, fun and delicious. I'm looking forward to the third dinner of the pop-up series which features James Beard Award-winning chef Marc Vetri who will share recipes from his new cookbook, Rustic Italian Food.  It's on February 22 and includes a signed copy of the book.  Tickets can be purchased online via the link below.  See you there!

So delicious, I love them.