Who: 30 Bourbon Enthusiasts & Master Distiller from Four Roses
What: 2nd Annual "Bourbon on the Brain" Bourbon Tasting Event
When: Friday, May 23rd at 7pm
Where: Steak 954, W Hotel - Ft. Lauderdale, Fl.
Why: Proceeds will benefit the University of Miami, Miller School of Medicine, Department of Neurology.

For $1,000 per person, Guests will receive...
1. A World Class Tasting Event
2. Delectable Cuisine from the Chefs at Steak954
3. Chance to Win Prizes all worth over $500
4. A Luxury Gift Bag worth over $150
5. Opportunity to Speak one-on-one with Masters in the Bourbon Industry
6. The Ability to Help Researchers Find a Cure for Memory Disorders

Contact
For more info or to reserve your spot call 305.206.3507 or email brobourbon@gmail.com

Steak954
Four Roses Bourbon
thechowfather
Posted by The Chowfather at 3:13 PM No comments: The Kentucky Derby is one of the most exciting sporting events of the year. The 140th "Run for the Roses" is Saturday May 3rd. Bourbon Steak will be once again be opening the bar and lounge area early in order to host a Derby Day party. (Details below) It's also a good opportunity to try their Week One Burger Month Burger.

So head over to Gulfstream Park that Saturday afternoon and place a couple of dollars on your favorite pony and then head over to Bourbon Steak to watch the race in style with a great mint julep and awesome bites from chef Gabe.
See you there!!

Turnberry Isle Miami celebrates the 2014 Kentucky Derby with its annual, lively party at Chef Michael Mina’s BOURBON STEAK, on Saturday May 3rd from 5 - 7 p.m. As part of the celebration, attendees can watch the races live on the lounge's 50 inch HD TV, and in the true spirit of the Southern Event enjoy Mint Juleps ($10 each) and complimentary canapés offered by Chef Gabe Fenton. Guests are encouraged to participate in a hat contest, with the first place winner receiving a beautiful hat from a local boutique. All attendees will be entered in a raffle to win a gift certificate, featuring a BOURBON STEAK dinner for two with a bottle of wine, or a cookbook signed by Chef Michael Mina. 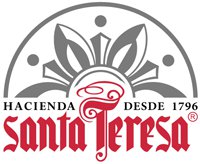 The evening features a rum tasting with menu pairings for $75.00 plus tax and gratuity. 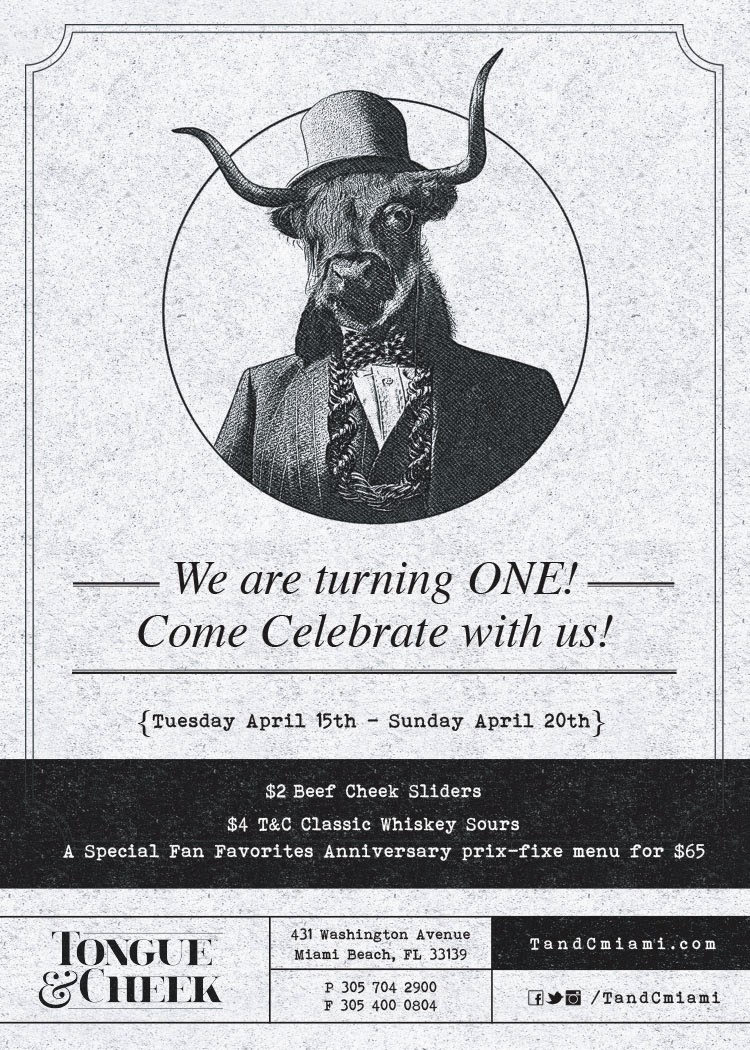 Tongue & Cheek is turning one and Chef DeRosa is throwing a party all week to celebrate.  The delicious Beef Cheek Sliders are $2.00 and can be washed down with $4.00 Whiskey Sours.  Chef DeRosa is also preparing a special tasting menu featuring his year one favorites for $65.00.
Posted by The Chowfather at 2:05 PM No comments:

Michy's is hosting a four-course, Italian wine dinner featuring Prunotto, an acclaimed winery in the Piedmont region, on Wednesday, April 16 at 7PM. The dinner will be hosted by Erik Saccomani of the Antinori family of wines. Each course will be paired with a different wine from the Prunotto collection. The price is $110PP. Call Michy’s to make your reservations today, as space is extremely limited.

Brewery Ommegang will kick off its third annual HopChef Competition on Monday, April 28 from 7-10 p.m. at the Biltmore Hotel. Competing Miami chefs will pair dishes with Ommegang’s Belgian-style ales and compete for the title of Miami HopChef 2014. Tickets, which are now on-sale at http://hopchef2014.ticketleap.com/Miami/, are the only way to take part in the HopChef action and include samplings of each chef’s delectable dishes and a selection of Ommegang ales.
The lineup:

· Michael Meuse – Doubletree Miami Airport Convention Center
Each chef will create one dish showcasing their imaginative beer and food pairing skills. The dishes, each paired with a specific Ommegang beer, will be served to a panel of judges and attendees to taste and score.

“Miami, with its vibrant foodie culture and neighborhoods, is the perfect location to kick off HopChef 2014,’’ said Bill Wetmore, Marketing Director for Brewery Ommegang. “This is our first year hosting a competition in Miami and we look forward to bringing some of the city’s top culinary talents together in the name of great beer and great food.”
The HopChef winner from Miami will be invited to the Grand Finale to compete against winners from Boston, Denver, San Francisco and Philadelphia at Ommegang’s annual Belgium Comes to Cooperstown festival on Aug. 9, 2014.The 2014 Grand Prize winner will receive a spotlight position on the SAVEURTastemakers board, a spotlight in SAVEUR Magazine & StarChefs.com editorial, a showcase with Brewery Ommegang at the StarChefs.com International Chefs Congress and a showcase station with Brewery Ommegang at the SAVEUR Summer BBQ, both in New York.


Tickets, which are available for $75 each, can be purchased at http://hopchef2014.ticketleap.com/Miami/and include samples of each chef’s signature dish and accompanying Ommegang beers as well as a commemorative Brewery Ommegang glass. The Biltmore Hotel is located at 1200 Anastasia Ave. in Coral Cables and the HopChef Event will run from 7-10 p.m.

Brewery Ommegang, located on a 136-acre farmstead in Cooperstown, NY, is regarded by many as the most beautiful brewery in America. The company opened in 1997 to brew fine Belgian-style craft beers, which are now distributed in 44 states. The brewery offers daily tours and tastings as well as a 100-seat café and an annual calendar of events, concerts and beer festivals. For more information, visit http://www.ommegang.com. Follow Ommegang on Twitter @BreweryOmmegang, www.Facebook.com/Ommegang, and on Instagram @BreweryOmmegang.

Posted by The Chowfather at 11:29 AM No comments:

James Beard Award-winning chef Mike Lata (Charleston) is taking over Harry's Pizzeria on Tuesday, April 8 at 7PM.  I haven't made it up to The Ordinary yet but was blown away by my meal at Fig a few years ago. Their pork trotters were number two on my dish of the year post and the overall meal made my Top Ten 2010. (MGFD took the top spot)

As I've mentioned several times here, these are really fun and delicious dinners. This one sounds like a winner too.


Mike Lata is Chef/Partner of FIG Restaurant in Charleston, SC, which he opened in 2003 with Partner Adam Nemirow and was just nominated for a 2014 Beard Award for Outstanding Wine Service. In December 2012, Lata and Nemirow opened The Ordinary, a classic oyster bar and seafood hall in Charleston's Upper King district, to much local and national acclaim. The James Beard Foundation has nominated The Ordinary as Best New Restaurant in 2013, and GQ, Esquire and Bon Appétit also named it one of the best restaurants of the year.

A native New Englander, Mike started his culinary career at an early age, working in kitchens in Boston, New Orleans, Atlanta and France before landing in Charleston in 1998. Mike is a hands-on, self-taught chef who continues to delight making the most basic things delicious, creating food that is bright, uncomplicated and understated. His longstanding and outspoken commitment to support local farmers, fishermen and purveyors has cemented his position as a notable champion for Charleston's flourishing culinary renaissance. Mike is an active member of the Southern Foodways Alliance, co-founder of the Charleston Slow Food convivium, and the Official Charleston Representative for the Charleston Convention & Visitors Bureau.

Nominated in 2007 and 2008 for the James Beard Foundation Award, Best Chef: Southeast, Mike took home the award in 2009. His food, philosophy, and contributions to the Charleston community have earned him recognition on national platform, including coverage in Food & Wine, Bon Appétit, Esquire, Garden & Gun, Southern Living, Travel + Leisure, USA Today, The New York Times and many more. Mike competed on the Food Network's "Iron Chef America" and was featured on the same network's "The Best Thing I Ever Ate." He was profiled on Dateline's "Platelist," which described Mike's food as "so good it will buckle your knees." FIG has been consistently voted "Best Restaurant in Charleston" by Charleston City Paper readers and continues to be a favorite local destination.

You can purchase tickets HERE


www.harryspizzeria.com
Posted by The Chowfather at 1:34 PM No comments: