As you will see from my post below, I was very fortunate to enjoy three great tasting menus in one week at The Bazaar.  Two of those meals occurred while chef José Andrés was in the house and one turned out to be an epic culinary adventure.  My third Best Meal of 2012 was an incredible dinner that I got to experience with my good friend Steve from Blind Tastes.

The main dining room was quiet on that night but the presence of chef Andrés loomed large. He was working the room in his jovial manner and made several stops at our table. Yes, he busted my chops a couple of times for taking pictures of the food especially when I tried to sneak in a shot with the flash on.  I know Steve loved that! During one of his stops, he proudly told us about the frequent time he was spending in Haiti assisting people struggling as a result of the earthquake. His goal is to teach them to bake their own bread and make there own food.  It was impressive and moving.

While polishing off one last gin and tonic after our meal,  a manager came over to our table and said chef  Andrés would like you guys to join him at his table. We hesitated, not! We jumped at the opportunity and what we witnessed was epic. Ever the perfectionist, chef  Andrés had the kitchen send out every dish and cocktail on the menu for him to taste. Each dish flew out of the kitchen and watching him taste and comment was entertaining and educational. "Needs more salt" he shouted out. "This is the BEST sangria in the world" he said while grinning. After he was done examining and tasting each dish they were passed our way. Those were the best "scraps" of all time! José's Tacos for daysssss!!!


For a food fanatic like myself, that night was truly special and one I will never forget. 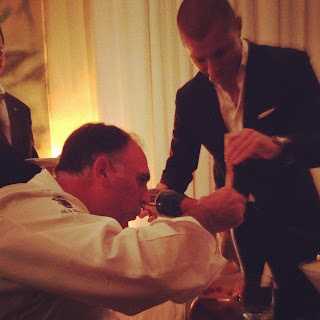 My initial post about my first few dinner and the rapid fire session is reposted below.

Four FANTASTIC meals including three in one week, two with chef José Andrés in the house and one that was EPIC in every way.  The Bazaar opened last month in the brand new SLS Hotel on the corner of 17th St. and Collins Ave. in South Beach.  I'm not going to bother discussing the forty or so dishes I've tried thus far because it would take me forever to do and it would probably put you to sleep.  Plus almost every dish was great to outstanding.  Instead, I will simply tell you that it is as good as food gets and a complete culinary treat from start to finish in every way.

Service has been equally impressive (with the exception of the busboy who removed half filled gin and tonics from the table on two occasions during my first visit) thanks to general manager Giancarlo Pagani and his friendly team.

Kudos to chef de cuisine, David Thomas, who was previously at Tomas Keller's Ad Hoc, for executing this extensive menu almost flawlessly from the start while continuing to improve with each visit. Thomas and his kitchen crew quickly made The Bazaar one of the best restaurants in town.

It was also great to meet and chat with Minibar chef  Jorge Hernandez who was in town to assist with the opening and menu tweaking.  Great guy and great chef.  Remember that name food fans.

Of course, the biggest treat of all was meeting chef Andrés on two occasions and having the opportunity to discuss food with him along with his overall philosophy and vision.  Hearing about the teaching and work he continues to do in Haiti was impressive and touching.  Nevertheless, the highlight was being invited to join him at his table where I witnessed an exciting rapid fire session where every dish and cocktail was brought to the table for him to taste and tweak.  Inspiring.  Oh and the best "scraps" I've ever had.

The food, creativity and passion of chef Andrés plus the super South Beach setting, easily make this one of the best all around dining experiences in the country.

As promised, I am not going to bore you with details about each dish since I've enjoyed too many.  The following is a photo recap via my iPhone of my first four visits.  I missed some shots of great dishes along the way and contrary to my dining partner in crime for three of these meals, Steve "Blind Tastes" BM, my flash was off for a majority of these shots.  Although I'm not a photographer and don't carry a fancy camera to restaurants, I still wanted to share my fantastic experience with you via my crappy shots.  Enjoy!!

RUN to The Bazaar soon and often.  There are a tremendous amount of treats on the menu coupled with great service and a fantastic overall dining experience.  Four stars for sure!!