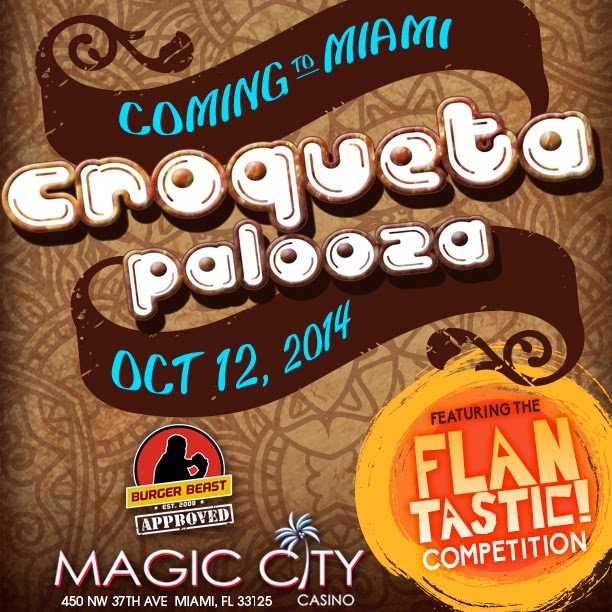 
You must be 21 years of age or older to attend.


Tickets to Croquetapalooza this way -> HERE
Posted by The Chowfather at 11:04 AM No comments:


Posted by The Chowfather at 4:04 PM No comments:

WHAT: On Saturday, Sept. 20, United Way of Miami-Dade Young Leaders will host an interactive cooking and eating experience, “Build Your Own Brunch” B.Y.O.B., modeled after VeritageMiami’s wildly popular Interactive Dinner.  Guests will spend the afternoon preparing a three-course brunch, under the tutelage of some of Miami’s most innovative chefs, Timon Balloo of Sugarcane Raw Bar Grill, Antonio Bachour of St. Regis Bal Harbour and Makoto Okuwa of Makoto.  Aside from the food, Titos Vodka cocktails will be available, and for all the beer aficionados, Wynwood Brewing Company will have the best fit brew on tap.

While the chefs will lead guests through each course on stage, attendees can look for guidance from Johnson & Wales culinary students that will serve as sous chefs and sommeliers.  All proceeds benefit United Way of Miami-Dade.

WHO: Timon Balloo, executive chef, Sugarcane Raw Bar Grill, is a graduate of Johnson & Wales University, and has been recognized by the university as a Distinguished Visiting Chef and a repeat recipient of the Zest awards.  In 2009, Balloo opened Sugarcane Raw Bar Grill, which is part of the Samba Brand Management.  Sugarcane captures the essence of kicking back and eating well.  It has received numerous awards, most notably a nomination for “Best New Restaurant” by the James Beard Foundation.

Antonio Bachour, executive pastry chef, St. Regis Bal Harbour Resort, where he creates desserts for the restaurants Atlantico and J&G Grill, and also for the hotel events.   Bachour, a graduate of Johnson & Wales, honed his trade as a pastry cook at Sand Hotel and Casino and Westin Rio Mar, before moving on to the Ritz-Carlton in San Juan, Puerto Rico.  In 2001, Bachour returned to Miami as the pastry chef at Talula, and also tried his hand at Italian delicacies at both Devito South Beach and Scarpetta in New York and Miami.  In 2009, Bachour was helped open the W South Beach Hotel.  Shortly after, he took over responsibility for all pastries for The Trump Soho hotel and its restaurants.  Dessert Professional Magazine selected Bachour as one of its “Top 10 Pastry Chefs” for 2011.
Makoto Okuwa of Makoto in Bal Harbour Shops, spent 10 years of culinary training in Japan, and then moved to Washington DC to work closely with Chef Morimoto.  He was soon asked to assume the Head Sushi Chef role at Chef Morimoto’s first American restaurant, in partnership with restaurateur Stephen Starr, and then later opened Morimoto NY.  In 2007, Makoto opened his own restaurant, Sashi Sushi + Sake in Manhattan Beach, California, where he remains a partner.  In 2011, he partnered with Starr again to open Makoto in Bal Harbour Shops.  Makoto was recognized by the James Beard Foundation for outstanding contribution.  He has appeared several times on “Iron Chef America” alongside his mentor Iron Chef Morimoto.

$75 for Young Leader (maximum 2 tickets per Young Leader at $75 each)
$100 general public
Tables of 8 available
Posted by The Chowfather at 12:46 PM No comments: