Lucali in a league of its own FIVE STARS (South Beach) 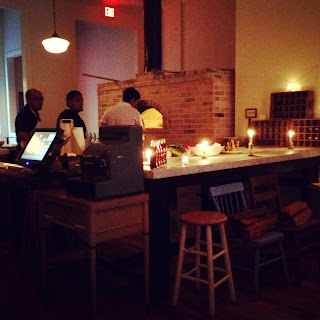 Bay Road and 20th Street in the Sunset Harbour neighborhood of South Beach has been dubbed by many as "Pubbelly Street" because of the presence of three popular and well regarded Pubbelly owned restaurants.  However, "Pubbelly Street" has been invaded by Brooklyn.  Lucali, the legendary pizzeria in the Carroll Gardens section of Brooklyn recently opened on the block.  And I strongly suspect that that street will now be known forever more as Lucali Street. Yeah, I said it.  Just wait until you try the pizza and see the lines that are going to form to get in.

Lucali is owned by Mark Iacono who opened the Brooklyn location in 2006.  And has had lines down the block ever since. Iacono keeps things simple by offering pizzas and calzones.  The Brooklyn location remains cash only and BYOB.  In an interview with Grub Street, Iacono openly admits that they don't have a wine permit because he didn't know they needed one.

In 2009, Alan Richman ranked Lucali the second best pizza in the country.

The South Beach location which is still in the midst of a soft opening, will have the same menu as Brooklyn with the addition of salads, beer and wine. And they take plastic.  Topping options are garlic, basil, portobello mushrooms, pepperoni, peppers, artichoke hearts, onions and shallots.  Sam Sifton fans   may want to opt for this combination.

Rumor has it that the calzones are equally as good.

It should be noted that they are also in the process of opening a wine and beer bar next door that looked pretty cool from my sneak peak.

What about the pizza? It's AMAZING!

Listen, I didn't need to make three visits to know Lucali is great. I didn't even need two.  And I didn't need to finish the pie on my first visit.  I knew from the first bite that this was the real deal. That's actually not entirely true.  I started to sense it as soon as I was seated at table one.  I was solo and Mark asked me if I was waiting for anyone.  I said no and he responded "then let's make your pie."

I had a great view of Mark meticulously working on my dough before rolling it with an empty wine bottle.  You could tell that he cared about every detail as he added the sauce and cheese and placed in into the wood burning brick oven.  It was more than obvious once the large, glistening pie was placed in front of me.  Wow! I blurted to the waiter.  My eyes opened wide and I happily smiled.

After the delicious first bite I looked up at Mark who was watching me and I instinctively gave him a huge thumbs up.  Clearly not the first time he's seen that look on a customers face.  Nevertheless, he nodded and smiled.

The pizza got better with every bite.  It features a thin blistered crust around the edges that gets a tad thicker as it progresses. The dough is very tasty and chewy.  The mozzarella is obviously high quality and as fresh as can be.  But the secret to Lucali's success for me is the sauce. It is instantaneously addictive.  I could taste the sauce on my palate all night and craved more when I woke up. It is easily the best pizza sauce I've had.

Of course, Mark nails the proper sauce, cheese and dough ratio, something I'm a stickler for.  The Margherita is topped with large pieces of fresh basil that are a nice touch.

As always, I had to go with the basic Margherita the first time but look forward to taking it up a notch next visit with some toppings.

As I was leaving, I walked up to Mark and told him I've been waiting for this for twenty years.  He said he was still tweaking the dough because some initial pies were hit and miss.  My pie was a grand slam and I suspect that there haven't been any misses.  He's a perfectionist and wants them all to be superb.

Lucali is the real deal.  And I would highly recommend getting over there fast before the lines start forming. 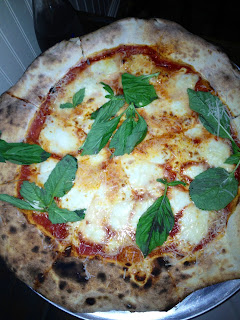 Not the best overall shot but it does capture the blistering outer crust. 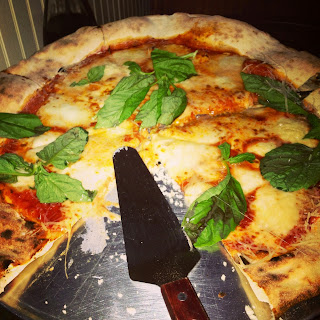 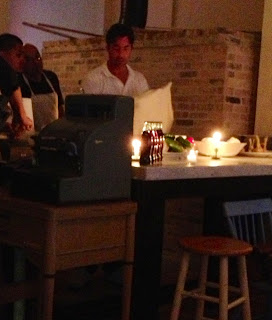 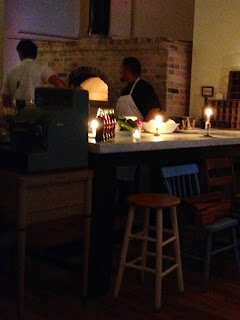 The wood burning brick oven is the focal point of the dining room.  It is my understanding that the Miami location is a replica of the original. 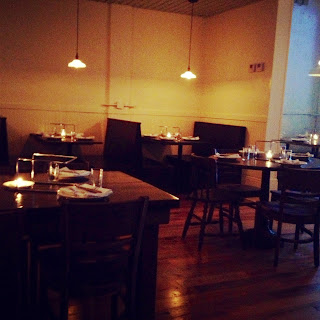 The sharp looking, candle lit dining room is the nicest pizzeria you will find. 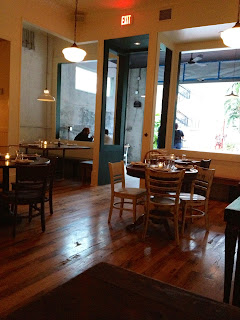 Inside view of the entrance and the outside seating.

Beastie Boys - No Sleep Till Brooklyn by hushhush112 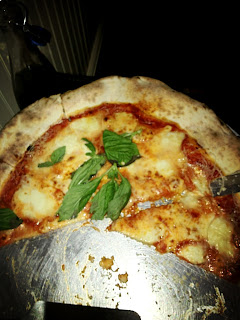 Posted by The Chowfather at 3:16 PM

Any idea what the hours are? Are they open for lunch?

They are still doing a soft opening. I'd call before going. They opened at 6 the other night. I don't think they are open for lunch yet.

what a place. I read about it and was going to walk there, but after reading your post I ran there. such a cozy little joint, you could even propose there. And the pizzas, well you said it yourself. I see this becoming a weekly thing for us.

that was me by the way, gourmandj. leaving comments here is such a pain in the ass

Thanks for the post. We tried this joint the other night and we were impressed. Glad to see South Florida has another true pizza. Ranks as my number two only behind Pizzeria Oceano, which is a great compliment!

Enjoyed Lucali's pizza in Brooklyn a few years ago. But who cares who ate there, Jay-who & Beyond-what. As the pictures truly state the crust is way too large and the sauce to cheese ratio is way out of proportion, as is the price, you got to be kidding??? Still standing as your recommended number 1 is Pizzeria Oceano in my book and Mauro's for NY style. I hope someone isn't falling for hype and flash???