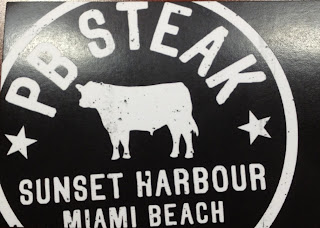 No steak for me on my first date at PB Steak but they still scored easily.  For those of you who have been living under a rock, this is the fourth restaurant the Pubbelly team, a collaboration between friends Andreas Scheiner, Jose Mendin and Sergio Navarro has opened on South Beach over the past couple of years. They are behind the popular Pubbelly, Barceloneta, Pubbelly Sushi and Macchialina spots.  PB Steak is clearly going to be another huge hit with locals and tourists too, thanks to its diverse and creative menu offerings, cool setting, solid bar area and cocktails. 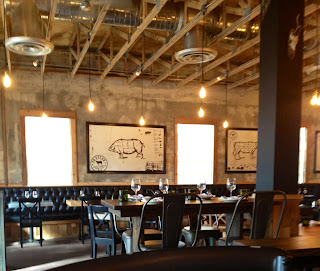 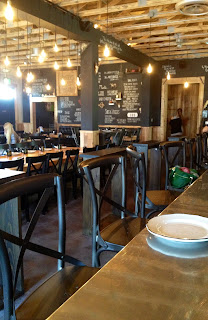 PB Steak is located on Purdy Ave. in the old Joe Allen's space in the Sunset Harbour section of South Beach.

The kitchen is manned by chef Jose Mendin who was born and raised in Puerto Rico. His culinary background is diverse.  He was part of the opening team at Nobu Miami before moving onto Nobu London. From there, he traveled to Spain where he worked for Jesus Ramiro at his kitchen lab.  Upon returning to Miami he became chef de cuisine at Sushi Samba before leaving for their Las Vegas outpost as a corporate chef. Subsequent to his tenure with Sushi Samba he helped open Mercadito in Chicago and Miami.  You know the next chapter...

I was very happy to see a friendly face managing PB Steak, Monique Hernandez who was bartender extraordinaire and my favorite one for years at Bourbon Steak.  She makes a mean old fashioned and sazerac so you know the bar will be top notch. And it's in great hands with Ashley Danella who has the perfect touch for proper cocktails.


Being my first visit, I wanted to sample as much as I could so I passed on the numerous steak offerings.  Instead, I opted for several small bites which were all great plus a delicious riff on the classic French Onion Soup and an outstanding Buffalo Sweetbread dish.  It should be noted that
although prices are on the inexpensive side, the portions are proportionally small.  Not a knock but  something you should be aware of going in.  It's perfect for my eating habits though.

They are currently open seven days a week from 6 to 12 and for lunch from 12 to 3.  They also recently started a Sunday brunch that Ashley and Monique highly recommended.

PB Steak gets two thumbs up from me on my first date.  I look forward to going back soon and trying more dishes including their steaks. I also look forward to sitting at the bar and enjoying  proper cocktails from Ashley. 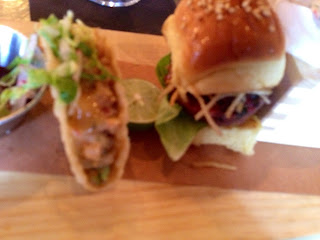 This blurry shot doesn't do any justice to the tasty and fresh Ceviche Taquito featuring hamachi, avocado, corn miso and bibb lettuce. 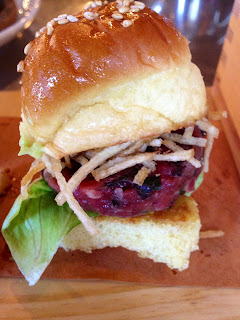 I really enjoyed the taste and texture of the steak tartare slider topped with thin frites, truffle and parmesan. 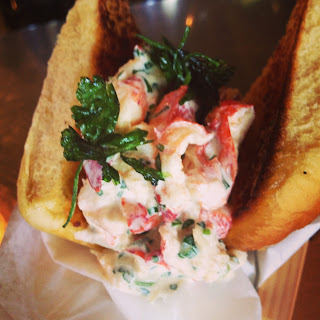 I'm no lobster roll connoisseur and I don't even own a lobster shirt (inside joke)  but I've had some awesome lobster rolls in the New England area. Chef Mendin delivered a surprisingly nice take on a traditional Maine lobster roll.  Here, chef Mendin uses a buttered potato roll that provides a nice contrast to the succulent lobster.  He also goes light on the mayonnaise which is refreshing to see. 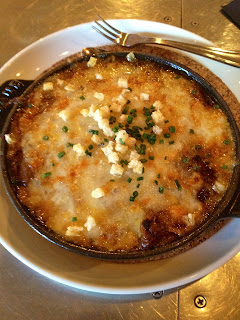 Chef Mendin's riff on a traditional French Onion Soup works well.  Although I must admit that I was hoping that those dumplings were going to be filled with soup like the awesome Chinese dim sum dumplings, Xiao Long Bao. 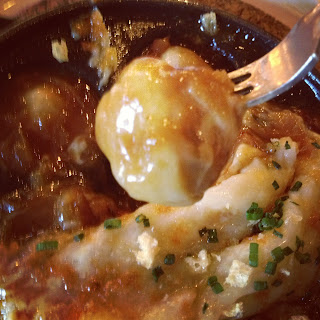 The traditional French onion soup flavors are all there and spot on. Chef Mendin adds delicious short rib dumplings seated in a traditional escargot plate to the equation.  But boy would I selfishly love to see some soup in those dumplings. 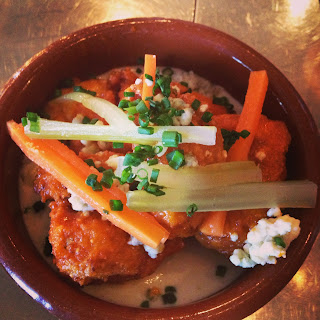 The Buffalo Sweetbreads are a home run and my favorite dish on this date.  The sweetbreads themselves were cooked perfectly and the traditional "Buffalo Wings" preparation showed a lot of restraint resulting in a very flavorful and balanced dish. These should be a huge hit during the Heat playoff run and Monday night football  Yes, they have a TV in the bar area. 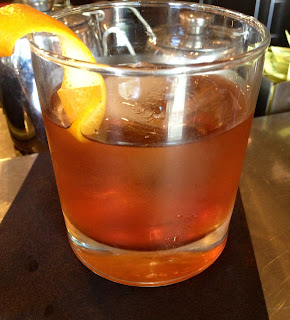 With Monique and the talented Ashley in the house I had to give the Chef's Old Fashioned a try.  Ashley delivered a very solid oldie.   I predict that the bar will become a very popular hangout for locals.

The Pubbelly team has put together all the ingredients needed to be a hit.  Kudos!

Posted by The Chowfather at 8:17 PM

Me and my lobstah shirt will be checking out that roll haha.