Steak 954 is Stephen Starr's first venture into the South Florida market. He is famous for Morimoto and Budakken and there is talk of a Budakken South Beach.

The restaurant is impressive/modern looking and features a huge aquarium filled with jellyfish. There is also a nice view of the ocean if you go for lunch or an early dinner plus there is an outdoor patio facing the beach.

I really wanted to try the Kobe sliders but passed since I was going with the ribeye as an entree. The tuna tacos with foie gras were also really tempting but when it was time to pull the trigger, I opted for the lobster/crab ceviche. It contained nice and fresh pieces of lobster and crab and was very good. My ribeye was a nice cut, cooked perfectly and very tender but unfortunately and surprisingly under seasoned and bland. The large side of stuffed hash browns I ordered was an over salted bust. Why was it sooo hard to simply say tater tots????

I was with a non drinker and didn't get a look at the wine menu. However, there were several reasonable btg options.

I really liked the look/atmosphere of Steak 954 and think Ft. Lauderdale really needed a place with a modern/sophisticated feel like this. It was packed with a lively crowd on a weeknight during my visit.

My meal was good but not great and my ribeye didn't come close to the steaks I've had at Mina's Bourbon Steak. Nevertheless, I suspect there are more hits on the menu and they should be able to correct the steak issue. So, I will be back soon to try more. It should be noted that they are also open for breakfast and lunch. 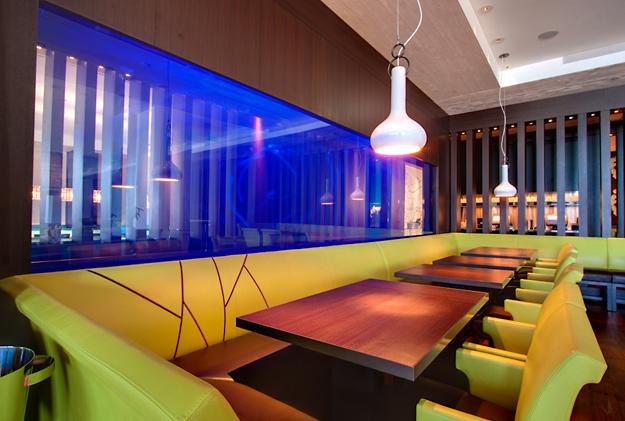 Photo by Greg Clark Photography
Posted by The Chowfather at 10:09 PM