The Miami food scene continues to grow and I was fortunate to enjoy several outstanding meals in our own backyard this year.  From the delicious and fun Pop Up Series hosted by chef Michael Schwartz at Harry's Pizzeria, to some great collaborations along the way and to the "underground and experimental" dinners we throw with talented chefs over at Cobaya Miami.

I must admit that doing this was not easy as each were great in their own way. As with my normal "tiers" these rankings take all facets of the meal into consideration. Food is the primary component but phenomenal wine or simply a great time can bolster the ranking.

Big thanks to all of the chefs, kitchen crews, managers, sommeliers, bartenders, servers and support staff for making 2013 another happy year for my belly!!


Drum roll please..... I hate to be lame but there is a TIE this year for My Best Meal of 2013.  Both featured great food and spirits (understatement) and were a great overall time.  But more importantly both raised money for important charitable causes.

TIE 1. "Pink" Collar Cobaya for a Cause with Danny Serfer  at Blue Collar.

This was a very special evening for Danny and it was for a great cause.  Danny's generosity was impressive.  He not only donated 100% of the proceeds to Susan Komen , he sourced some of the most luxurious ingredients around in order to make sure the generous donors had a special meal. He also closed the restaurant for the night and his staff donated their time.  We were also treated to a cameo appearance by one of the best sommeliers in town, Allegra Angelo.

"Thank you for being a part of this event.  My mother died from breast cancer 11 years ago this month.  All proceeds will be going to the Susan Komen Foundation for breast cancer research. All the dishes here are takes on what were my mother's favorite things to eat. Enjoy."   Danny

My original recap is  here.


TIE 1. First Annual Bourbon on the Brain organized by Erin B a/k/a Brother Bourbon and generously hosted by Steak 954. 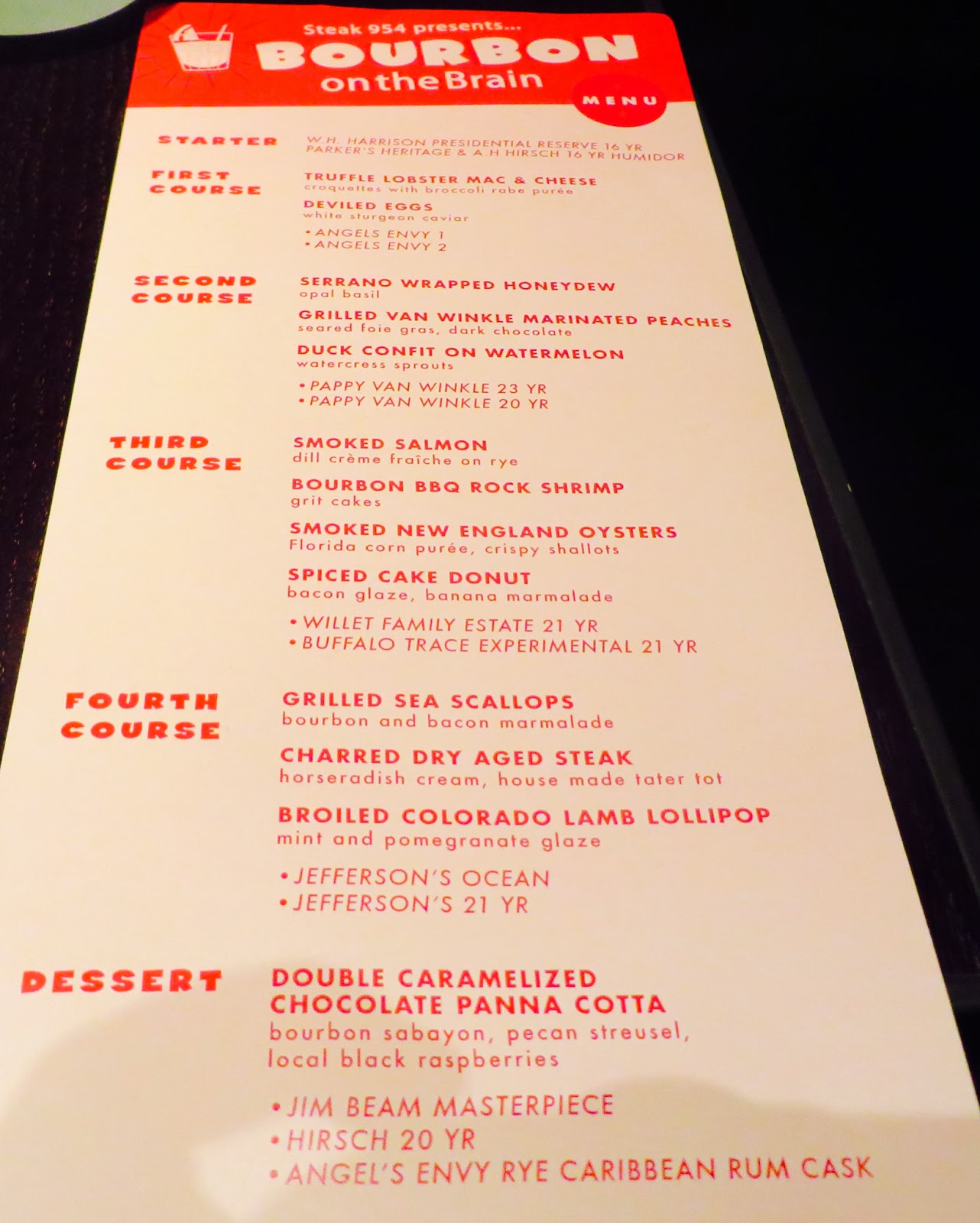 Wow! Where do I begin with this one?

How about with Wesley Henderson COO of Angel's Envy in the house sharing his bourbon knowledge with the group and guiding us through the tasting.  And generously pouring three of his own bourbons and rye.

Or with Chef Jason Smith who nailed the very difficult task of preparing a tasting menu that paired with several exceptional and rare bourbons.

Or with Peter Ortino the General Manager at Steak 954 who was instrumental in Steak 954's involvement and who made sure the dinner was flawless.

Or with Courtney B who assisted Brother Bourbon with the organization and tolerated hundreds of bottles of bourbon scattered all over her apartment.

Or with the 30 generous donors who spent $1,000.00 to attend the event plus one who matched all proceeds.

Those are all great spots to start but it really starts and ends with Erin.

If you know Erin, you know that he LOVES bourbon.  But you also know that he is extremely generous.  He's always buying someone a drink at the bar or inviting people over to taste his rare bourbons. Erin is also very charitable and has raised money for several causes over the years.

He decided to combine his love of bourbon with a cause that was important to him and created Bourbon on the Brain.  This event was conceived, organized and promoted by Erin with a hat tip to his lovely wife. He wisely used the increasingly popular bourbon as a vehicle to raise a tremendous amount of money to help fight Alzheimer's Disease. 100% of the proceeds went to the University of Miami - Miller School of Medicine, Department of Neurology.

The evening started with W.H. Harrison Presidential Reserve16yr along with Parker's Heritage and the best bourbon you'll never taste, A.H Hirsch 16yr Humidor.  We moved on to Angel's Envy 1 and 2.  Pappy Van Winkle 23yr and 20yr were next.  Willet Family Estate 21yr and Buffalo Trace Experimental 21yr were paired with course three.  Jefferson's Ocean and Jefferson's 21yr rounded out the savory portion.  Dessert was accompanied by Jim Beam Masterpiece, Hirsch 20yr and the yet released Angel's Envy Rye Caribbean Rum Cask.  These were paired with dinner.  There were tons of others to taste along the way.

Personal thanks from me to Michael Schwartz and the Genuine Hospitality Group, John Kunkel and 50 Eggs, Elad Zvi and Gabriel Orta and The Broken Shaker and Chef Brad Kilgore for their generous donations to the auction that helped raise additional proceeds.

And Save May 23, 2014. The second annual Bourbon on the Brain is going down and one of the best  master distillers around will be in the house.

I never did a recap so I'm posting some pictures below.

Kudos to Erin for a great event.  I'm proud to call him my Brother...Bourbon. 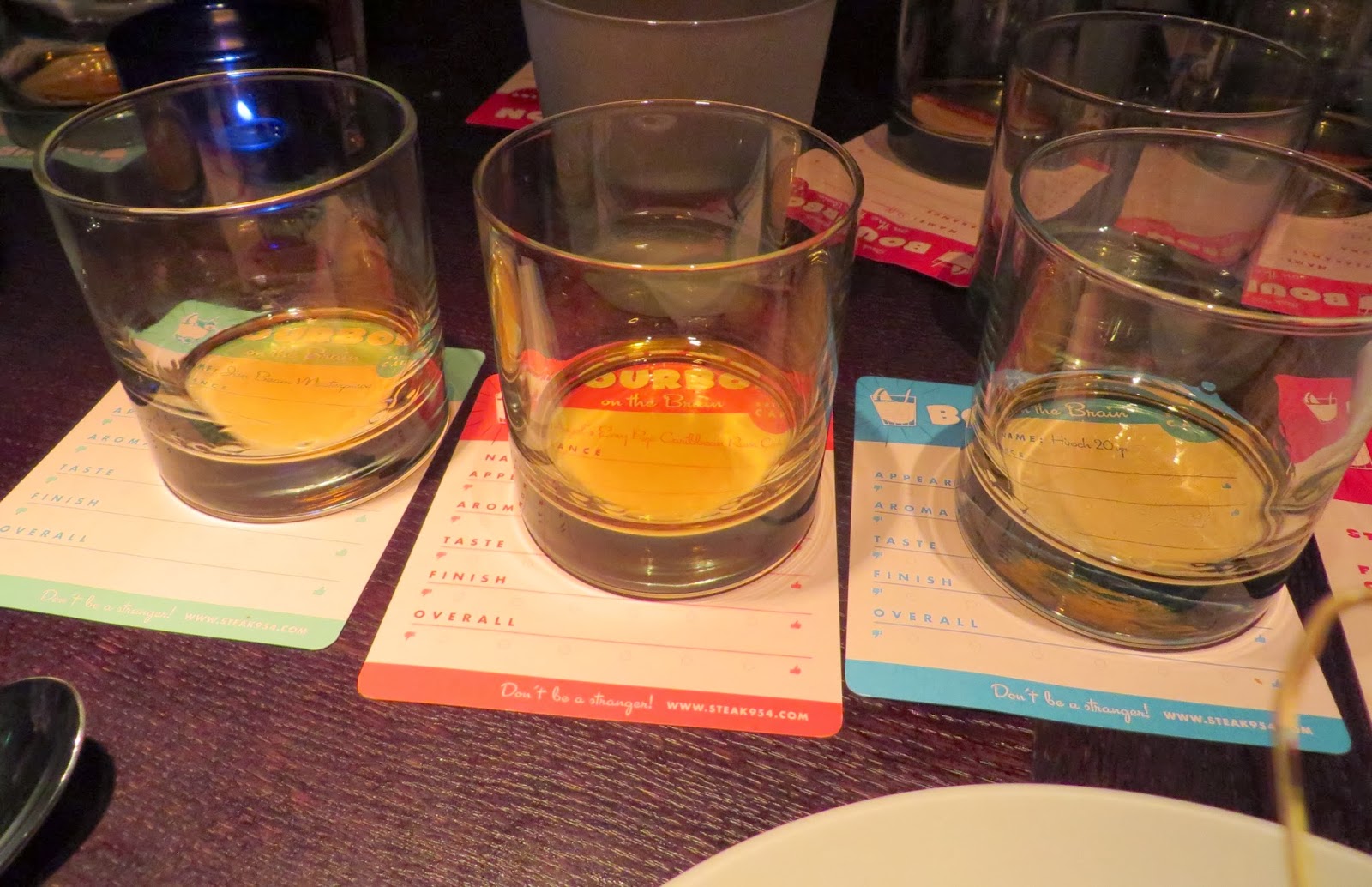 Posted by The Chowfather at 3:14 PM