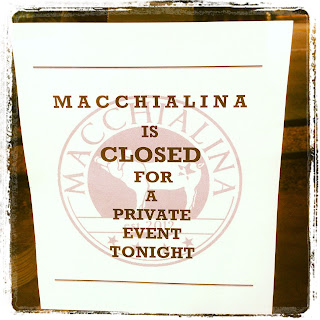 Michael Pirolo has rapidly become one of my favorite chefs in town. Many of you are probably familiar with him from his days as executive chef at the critically acclaimed Scarpetta. He left Scarpetta to join forces with the Pubbelly team and Macchialina was born last June. As I've written here before, Michael is clearly passionate about Italian food and its soulful flavors and it shows in every plate. Combine that with his perfect execution and you have one of the best spots in town.

I was extremely excited to have Michael host one of our "underground experiments."  In a nutshell, Michael did his thing and he nailed it.  He served several dishes featuring various components that were all hits.  There were no misses, not even close. Everything was cooked perfectly and layered with loads of addictive flavors.  I've been craving several of the dishes since the meal ended and writing this recap is not helping at all.

Michael had a ringer in the kitchen, chef Nina Compton who was Michael's right-hand man woman for several years at Scarpetta before he left.  She is running the show at Scarpetta now and I am long overdue for a visit.  As usual, Michael's partner, Jennifer Chaefsky did an outstanding job with the front of the house. Her warm and welcoming smile always makes you feel at home. She also made sure that service remained impeccable despite the group size plus she was responsible for the spot on wine pairings.

I would be remiss without mentioning that the dinner was almost canceled last minute because they did not have any power in the restaurant all day until 5:30 that evening. (Dinner started at 7:00)  Michael instructed Jennifer to contact me several times to bring me up to speed on the situation.  Fortunately, Jennifer declined and absorbed all of the stress for me and my co-conspirators.  Thank you! The Cobaya gods worked some magic.

Upon arrival, guests were welcomed with a flute of Lambrusco and an impressive amount of fantastic Formaggi, Salumi and Stuzzichini.

Michael's house-made porchetta is outstanding and something I highly recommend ordering off the Salumi Board.

After taking our seats following the wonderful cocktail reception we were treated to two terrific bites of fantastic fresh fish. Michael started us off with his riff on the classic Italian dish, prosciutto and melon.  Here, he served fresh tuna "prosciutto" style and paired it with compressed melons.

The second bite featured a delicious citrus cured swordfish topped with dill puree and bottarga. If this makes an appearance on the menu you need to order it.

The second Antipasto was a very nice Fritto Misto. The fry was light and the batter was tasty yet subtle enough to let the main ingredients shine.

For the Primi Piatti course Michael opted for two dynamite pasta dishes. First up was a delicious sweet pea raviolini with spring garlic and speck ham. It should be noted that all of his pastas are hand made in house. He also cooks his pasta perfectly. The raviolini by itself was nice but the combination of tasty speck and garlic packed a very nice punch.  This is a dish I would easily order again and again.

As much as I enjoyed the raviolini it was no match for the Black Mamba Spaghetti.  Here, Michael went for the guinea pig jugular and served a sensational squid ink spaghetti along with sea urchin and lobster that resulted in a flavor combination that was off the charts good. I can still taste it. No lie and I want more of it right now.  This was a dish of the year caliber offering.

For the Secondo Piatto Michael dropped an impressive Polenta Bomb on us that resulted in a buzz around the room.  The outrageously good creamy polenta was topped with terrific trippa, crispy quail and ramps.  It was a great idea and tremendous presentation that was a real crowd-pleaser.  I suspect that he was able to get a lot of people to try tripe for the first time.  This was another winning combination.

The polenta board was acommpanied by some very nice seasonal vegetables.

Holy cannoli!!  These were an old school treat that had a tasty shell and a nice subtly sweet and creamy ricotta filling.

We were treated to another great dessert. A creamy goat cheesecake was topped with peanut brittle and topped with mango ice. A great finish to a fantastic meal.

One last treat as the guinea pigs left. What a classy touch and a Cobaya first. The goodie bag was filled with a breakfast stromboli that I devoured the following morning before I could take a shot.

If you haven't been to Macchialina yet I highly recommend paying them a visit especially if you are an Italian fan.

If I still lived on South Beach, I would eat there on a regular basis.

Big thanks to all of the guinea pigs for your continued interest and support.  See you soon!

Good job. thanks for sharing.