Blue Collar located at 67th and Biscayne in the Upper Eastside of Miami recently started a late night, after hours menu. Chef Danny Serfer is wisely filling a culinary void during that time. It's also a great opportunity for people in the industry to kick back after a long weekend shift and eat some great food and meet some new friends in the intimate dining room or out on the patio.

The special late night menu is available every Friday and Saturday night from 11:00 p.m. until 2 a.m.  It features several unique items that are not available on the normal dinner menu as well as a couple of his great staples. And don't forget to take advantage of  two for one $4 Narragansett Lagers.  Chef Serfer excels at comfort food and the late night menu is no exception. 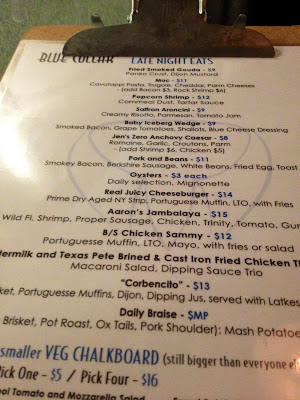 It took me a couple of weeks but I finally skipped dinner and stayed awake last Saturday night in order to pay a visit to Blue Collar after dark. Once comfortably seated at the counter, I participated in a an awesome late night tasting menu.

First up were a trio terrific French Kiss oysters from the waters of Miramichi Bay, New Brunswick. Daniel has been sourcing great oysters and rumor has it that the rare and beloved Belons may make an appearance in the near future.

Up next was a nicely fried smoked gouda cheese featuring a tasty panko crust and topped with a dollop of dijon mustard.

Out next, plump cornmeal dusted popcorn shrimp and tartar sauce.

Danny unloaded a generous portion of jammin' jambalaya on me next.  Chef Aaron's awesome version of jambalaya consisted of a combination of flavorful, spicy and fresh wild Florida shrimp, proper sausage and chicken. After devouring the dish, Danny looked at me and said  "you can eat."

It should be noted that this is currently only available on the late night menu so plan accordingly. However, I suspect that this dish has a shot to make an occasional appearance on the dinner menu thanks to its popularity.

Despite being full and approximately 12:30 a.m., there was no way I was leaving without tasting Danny's fried chicken. Danny humbly claims that his fried chicken is second best in town behind his beloved Publix.  I disagree. This is possibly be the best fried chicken in town.

Here, Danny brines his bird with a delicious combination of buttermilk and Texas Pete Hot Sauce and then fries it in a cast-iron skillet. This results in a nice crispy outside and really moist meat.  Unfortunately, the process is too time consuming for him to offer during regular service so you are only going to find this gem late night.

The crew obviously had some fun playing around with chocolate, peanuts, caramel and oh some pork belly.

Also making an appearance on the late night menu is Danny's daily braise.  This is either brisket, pot roast, oxtail or pork shoulder and always accompanied by mashed potatoes.  Danny excels at braises and one of my favorites is his spicy oxtail.  A perfect braise and nice heat make this a dish to look out for either late night or on the daily specials board.

Have no fear, Danny's killer burger is here. Yes, that "real juicy" cheeseburger made from prime dry aged NY Strip and placed on a Portuguese bun is available late night.  It is one of the top burgers in town.

"Corben" fans are covered too.  You know who you are!

Danny is the comfort king with a little bling. He takes pride in delivering great, solid, straightforward food that is without pretense. And he does that well. But don't be fooled, he can go fancy on you too.

Bottom line, late night at Blue Collar is a laid back, fun time with a neighborhood vibe. So skip dinner and stay awake this weekend and pay Blue Collar a late night visit.

How long before it was safe to fall asleep?