That funky little spot on the periphery of downtown Miami that serves fantastic global cuisine played host to the latest Cobaya experiment.   neMesis Urban Bistro is located in the Legal Arts Building a few blocks west of the American Airlines Arena and close to the Adrienne Arsht Center.  It's one of my favorite spots in town and also one of the best.  It's the brainchild of former Top Chef contestant Micah Edelstein.  Micah has traveled the world and her culinary experiences are clearly on display throughout her menu.  Not surprisingly, her Cobaya menu followed suit.

When we approached Micah about doing a Cobaya she immediately mentioned her desire to do a fun Sunday afternoon Brunch since she had never done one. We were brunch virgins as well and were ready to pop our brunch cherries so it was a perfect match. It should be noted that the brunch sort of turned into "dunch" since Micah and crew allegedly do not function before noon.

Thus, thirty hungry guinea pigs assembled at Micah's funky restaurant at 3pm on Sunday June 24, 2012. For those wondering, yes, there were people still floating out of Club Space from the night before. Who needs bath salts and molly when you have Cobaya?? (insert cured pig's face joke here) 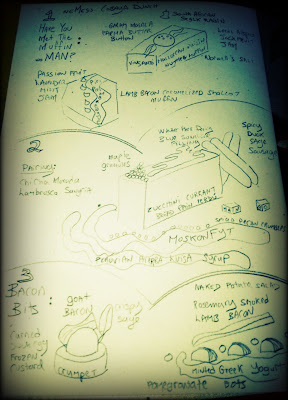 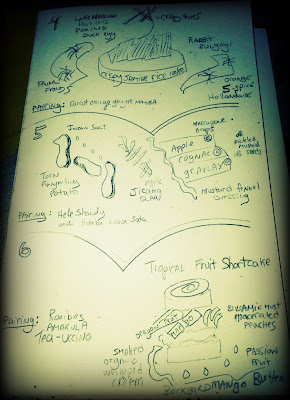 Yes, this was the actual menu for the day. Our table had fun trying to follow the creative mind of Micah and decipher each course. 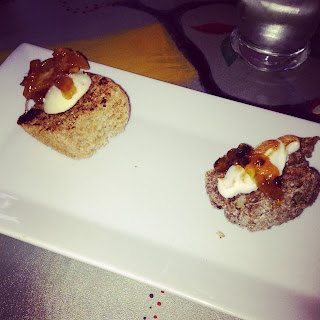 The first course was titled, "Have you met the muffin wo-man?" On the left is a vin santo Mallorcan raisin nutmeg muffin topped with garam masala Parma butter and local all spice jackfruit jam. This was paired with a delicious lamb bacon caramelized shallot muffin topped with piri piri meringue and passion fruit lavender mint jam. As you can see, there were lots of layers of flavors with very bite along with the pleasant textures of the muffins. This was a nice start to the meal. 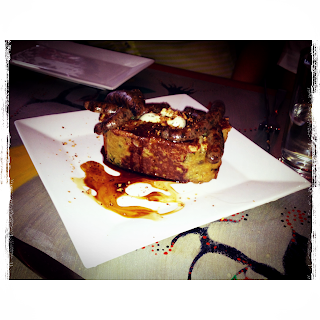 The next course was zucchini currant bread French Toast a/k/a pain perdu. The bread was filled with a creamy Winter Park Dairy "Blue Sunshine" cheese. It was paired with a Peruvian hierba luisa syrup and topped with spiced pecan crumble and spicy duck sage sausage. I enjoyed this dish primary because of the texture of the bread along with the "Blue Sunshine" filling.

This was paired with our first cocktail of the day. Mixologist Micah served a chicha morada sangria mixed with Italian lambrusco and topped with a small dice of fruit. Micah explained to us that chicha morada is a Peruvian drink that she fell in love with while hiking through the Sacred Valley. It's made from a long slow cooking process of purple corn, fruit skins & spices. 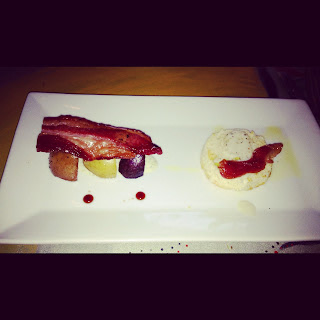 "Bacon Bits" arrived next. On the left is a lamb belly that was spiced rubbed, cured and rosemary smoked. It's resting on a naked potato salad, minted greek yogurt and pomegranate dots. The second bit featured a local goat belly that was spice rubbed, cured and sage smoked. It is sitting on on a duck egg frozen custard and crumpet. I enjoyed both bites on this unique bacon as well as the supporting cast. 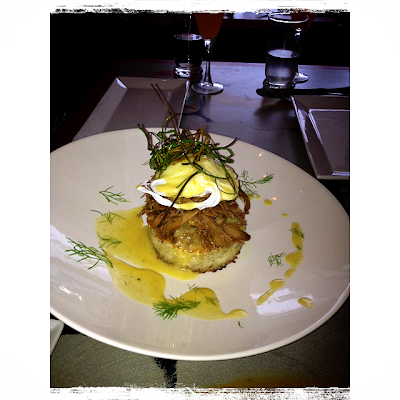 Up next was an awesome spin on a classic dish, eggs benedict. Here, Micah marinated whole rabbits sourced from Seriously Organic, in a housemade bulgogi sauce. After they were braised, the meat was shredded and served on a crispy jasmine infused rice cake and paired with an orange 5-spice hollandaise. It was topped with a perfectly poached Lake Meadow Naturals duck egg and crispy chives. Each component of this dish was outstanding on its own but they combined to form a fantastic overall dish. 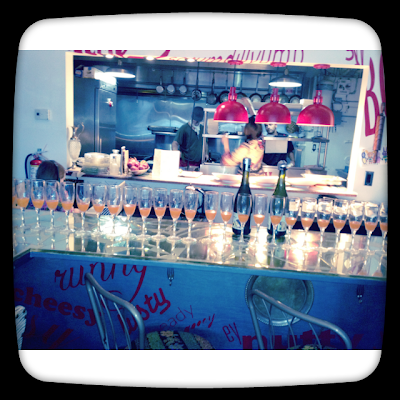 It was paired with a unique carrot, ginger, orange mimosa. The juices were freshly squeezed and mixed with organic Tiamo prosecco.


Micah provided us with another twist on an old school dish. This time she went Jewish Deli on us with a version latkes and lox. Micah opted for one of my favorite cured salmons, gravlax. It was thinly sliced and topped with an nice apple cognac sauce, mascarpone dots, mustard fennel dressing, picked mustard seeds and apple jicama slaw. It was paired with torn fingerling potatoes. I thoroughly enjoyed very bite of this dish.

It was paired with a very refreshing Hefe Shandy. This featured a combination of Hopf Hefeweizen beer from Miesbach, Germany and a house made Hierba Luisa soda. Micah explained that hierba luisa is used as a tea in peru. 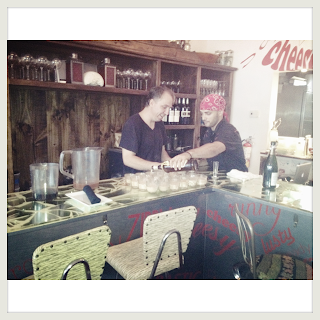 The crew hard at work preparing the Rooibos Amarula tea-uccino. 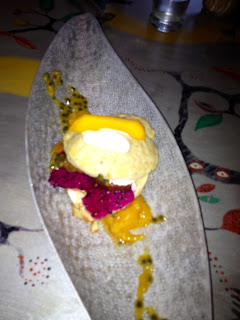 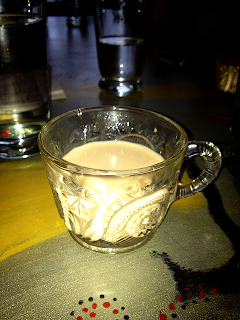 The last pairing of the day was a Rooibos "Red Bush" tea-uccino. It was made with organic milk and Amarula which is a combination of marula fruit which is fermented in oak for two years and blended with cream. Micah claimed that elephants travel hundreds of miles for this fruit which causes intoxication.

This was a fun way to spend a rainy Sunday afternoon. It doesn't get better than sharing great food with a great group of food lovers. Big thanks to all the guinea pigs in attendance and thanks for the continued support.

And thank you chef Micah and your team for participating in an "experiment" and for taking us on another wonderful journey around the world.

If you haven't been to neMesis yes, I would recommend paying a visit soon before it becomes impossible to get a seat. Sit back, relax and enjoy the journey.

www.nemesisbistro.com/
Posted by The Chowfather at 12:27 AM