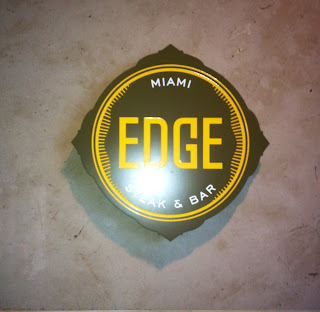 The Edge Steak & Bar is a fairly new restaurant located in the lobby of the Four Seasons hotel in downtown Miami.  Don't be fooled by the name, this is not your typical steak house.  Executive chef Aaron Brooks and team have created a diverse modern menu and are serving some of the best food in town.

Chef Aaron Brooks hails from Australia.  He has spent the past ten years working in Four Seasons' kitchens including Vancouver and Boston before taking his talents to Miami.  His right hand man and Howie Mandel look alike, James King has manned the kitchen at The Breakers Hotel and Four Seasons in Palm Beach.  He also spent time at the Four Seasons in Palo Alto, California before returning to Florida to work at Ameila Island Plantation Resort.

For the past few months they have been hosting excellent themed dinners on the last Tuesday of every month.  I've attended the last three which included a scotch and cigar dinner, a champagne and seafood dinner and a whiskey beer and barbecue dinner.  All three were fantastic and I encourage everyone to attend one.  Rumor has it that next up are two of my favorite things, Pinot and Pork. Shhh!

After eating several meals at the Edge it was obvious that Chef Brooks creative and precise cooking skills coupled with his diverse culinary background and passion for food would be a perfect fit for the Cobaya kitchen.  He did not disappoint.

For Cobaya, Chef Brooks opted to stay close to his home and went with a Southeast Asian theme. He explained to the group that when we told him to cook whatever he wanted he decided to treat Cobaya like he was cooking for friends.  He wanted to cook food that he loved that was close to his heart. Well, it showed. 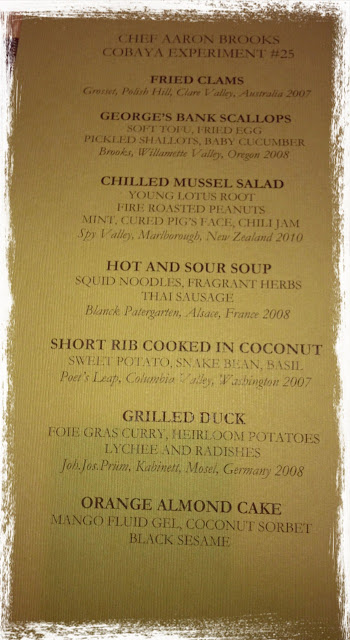 Chef Brooks wisely paired each course with a diverse and delicious riesling from around the world. 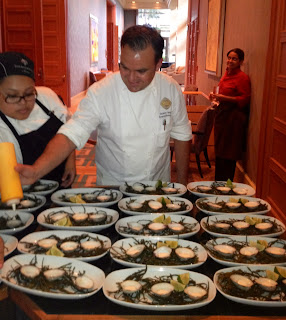 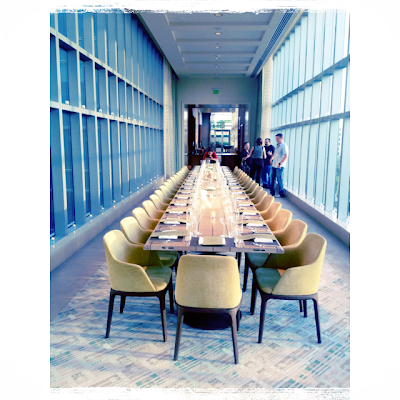 Upon arrival, thirty five hungry guinea pigs were escorted by general manager Peter Triolo to a private area in the hotel where a long table over looking Biscayne Bay on one side and a waterfall on the other awaited. 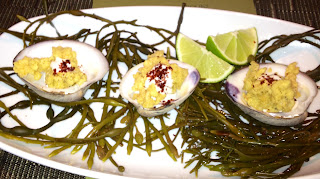 First up was a tribute to my co-conspirator in crime, Blind Tastes a/k/a Mr. Bourbon who hails from the Beantown.  Three fresh and plump clams were perfectly fried in a light batter and topped with a tasty tartar-esque sauce.  These were a nice bite and a great way to start the night.  It was paired with a dry 2007 Grosset Riesling from Australia was probably my favorite wine of the night. 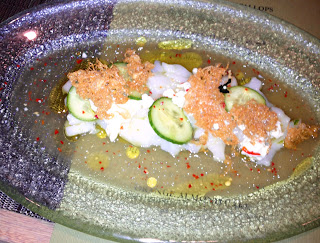 Chef Brooks ventured into Southeast Asian territory with George's Bank scallops.  The scallop dish was the first of many that showcased his ability to create well rounded and complete dishes that were layered with flavors and textures.  This featured sushi soft sliced scallops marinated in lime zest and extra virgin olive oil and topped with a deep fried scrambled egg which provided a great crunchy texture.  The dish also featured some welcome heat via Thai bird eye chilies.  It was paired with a 2008 Brooks, Willamette Valley. 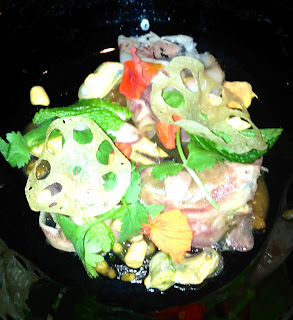 A chilled mussel salad was a standout and possibly the best dish of the night.  It was a culinary treat for the senses.  It was visually stunning thanks to the myriad of colors that popped off the plate.  The numerous ingredients consisting of young lotus root, fire roasted peanuts, mint, cured pig's face and chili jam also provided a plethora of flavors and textures along with a nice aroma.  As good as the dish was as a whole, the pigs face stole the show. It was a dynamite piece of tender and flavorful pork.  It was brined 12 hours with soy, salt, palm sugar, anise, ginger, garlic, chili and cooked sous-vide for 12 hours.  Every bite of this dish was a piece of perfection.  Paired with a 2010 Spy Valley, Marlborough, New Zealand. 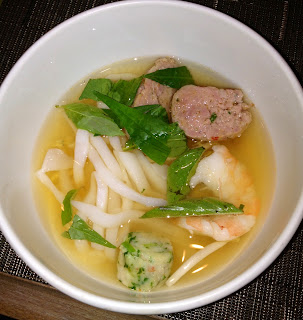 Next was Chef Brooks riff on the popular hot and sour Thai soup, tom yum goong.  His broth was packed with flavor and nice heat.  He added pleasantly textured faux noodles made of squid.  Chinese sausage, shrimp and a shrimp cake were welcome additions that rounded out a really tasty dish.  Paired with a 2008 Blank Patergarten, Alsace, France. 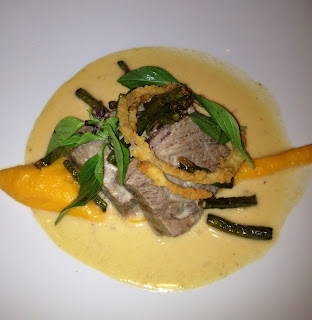 The next course featured a short rib that was braised in coconut for five hours with ginger, chili, palm sugar and fish sauce.  It was paired with a panang style curry sauce consisting of a coconut based curry with peanuts and a lemon grass paste.  Sweet potatoes, snake bean and basil rounded out the dish.  The short rib was very tender and the curry provided nice subtle flavors.  Paired with a 2007 Poet's Leap, Columbia Valley, Washington. 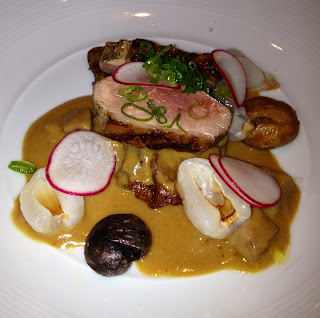 The last savory course of the night was a knockout duck dish.  It featured a grilled duck breast along with a tasty and crispy duck confit.  It was paired with an unbelievable foie gras curry.  Chef Brooks prepared this curry in the massamam style combined with some Indian influences including cumin, coriander, clove, ginger and chills.  He finished the curry with the foie.  Redland lychees and baby heirloom potatoes accompanied the dish.  As much as I enjoyed the duck confit it was the foie curry that was the highlight.  The flavor was initially subtle but increased with each subsequent taste.  I was saddened to see the duck and potatoes disappear so quickly leaving behind a puddle of the curry.  It's Cobaya and the gloves were off but I still refrained from sticking my tongue out and licking the plate.   A couple swipes of the food less fork would have to suffice.  This was a superb dish.  Paired with a 2008 Joh Joh Prum, Mosel, Germany. 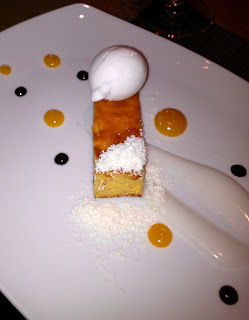 A subtly sweet orange almond cake topped with a refreshing coconut sorbet and paired with black sesame and mango fluid gel was the perfect ending to a perfect meal. 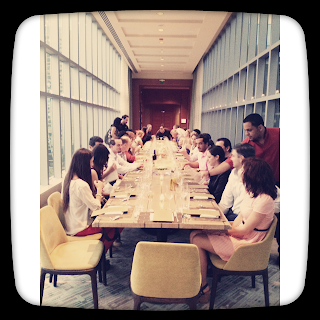 Big thanks to Chef Brooks and the entire team at Edge Steak & Bar for a great meal and enjoyable evening.  Thank you to all the guinea pigs who attended and continue to support Cobaya.  It was nice seeing so many new faces in the crowd.

Chef Brooks has tremendous talent and really knows how to create very flavorful combinations.  Nothing he serves is heavy handed.

www.edgerestaurantmiami.com
Posted by The Chowfather at 7:39 PM

These dishes are fantastic! I'm pretty sure the franchise planning isn't that hard because with how these cuisines are prepared, people all over the world would easily love it.

Edge Steak & Bar is a new restaurant? I'd say, it's a good business, especially if you know you can serve dishes as excellent as that. People are very particular in taste, nowadays. If you can succeed in giving them the taste they crave for, then you can make it to the top. Congratulations to Edge Steak & Bar!

When we stayed at Four Seasons Hotel a few years ago, Edge Steak and Bar wasn't still there. It's too bad we weren't able to try it out because we're always on the lookout for new restaurants to experience it ourselves.