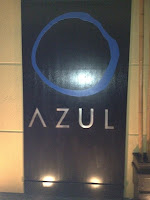 Last December Azul hosted a spectacular Cobaya dinner that was filmed by Andrew Zimmern and his great show Bizarre Foods. You can watch part of that episode here. Subsequent to that dinner, Chef Joel Huff left Azul and handed the reigns over to Jacob Anaya and Brad Kilgore. As a result, I automatically dropped them in my Tiers of Excellence rankings from one to three. This was not a shot at Brad or Jacob but something I felt was warranted because of the departure of a talented chef like Joel.

Well, this prompted the proud and confident Brad to start harassing me via twitter, email and text insisting that I pay a return visit. Brad wanted the opportunity to prepare a tasting menu that showcased his skills and proved that Azul was still one of the best restaurants in town. We finally hammered out a date and I rounded up a posse of fellow food fans including Food for Thought, Miami Restaurant Power Rankings, Blind Tastes and JDonn.

During our Cobaya dinner at Azul, Andrew Zimmern dubbed Brad "Wall Street" because of his slicked back hair. However, that nickname should stick because Brad's food is MONEY!! He is a super talented and creative chef who uses his cutting edge skills to create fantastic dishes. It should be noted that Brad is still in his twenties.

Prior to moving to Miami and joining Azul, Brad spent a few weeks in the kitchen at Alinea before taking advantage of an opportunity to work under Laurent Gras who was opening L20. He eventually left L20 to open Epic also in Chicago where he was the executive sous chef. During his tenure at Epic, it was named one of the best new restaurants in the country by Esquire magazine. 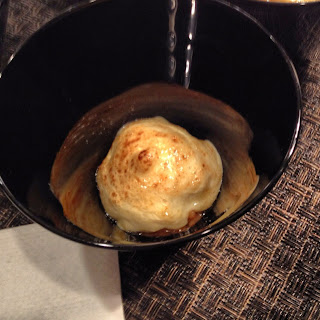 Our first bite of the night was a delicious Vitello Tonnato amuse bouche. This dish was inspired by a staff meal Brad had while working in Italy. That version featured thinly sliced veal loin with olive oil poached tuna and mayonnaise spread. It was topped with chopped parsley and capers.

Brad's amuse was quite different but with the same principles. On the bottom of the cup was a warm marmalata of braised veal breast and prosciutto mounted with goat butter and parm. On top was an organic egg yolk emulsion using sous vide yolks, poached ahi tuna, creme fraiche, raw garlic, olive oil, and lemon juice. It was charged twice in the ISI container then bruleed with a torch. Brad then spooned browned goat butter over the top to complete the dish. 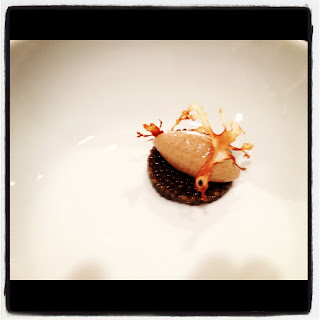 I'm a big caviar fan but generally go the traditional route when eating it. The first course featured an enjoyable twist on a classic pairing of caviar and vichyssoise. Here, Brad boldly served it with a cauliflower gelato and white chocolate. This unique combination of salty, sweet, rich and deep roasted flavors was fantastic. 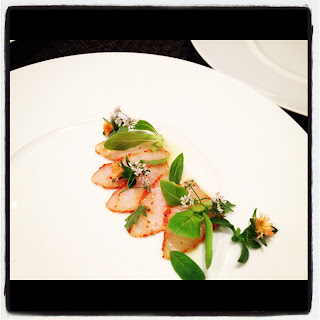 Brad followed the richness of the last dish with a lightly cured cobia. The cobia was cured in sour orange juice, sea salt, espellete, aleoppo flakes, and lime zest. The "vinaigrette" which was poured table side was composed of local sour oranges which were juiced and thickened with tapioca starch and culantro shiso oil. Citrus crystal leaves, coriander citrus blossoms, shiso, lemon verbena, and baby sweet romaine accompanied the cobia. A perfect bite and progression. 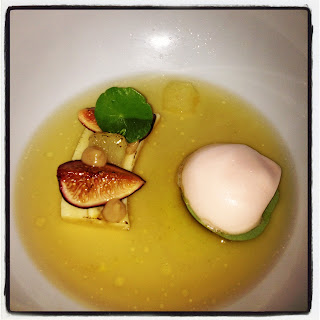 Brad attempted to source Jinua Ham for his XO sauce but elected to bypass breaking the law. Thus, he opted to make a consommé from smoked virginia style ham and then steeped the XO into it for four hours. He wanted garnishes that were strong but not overpowering. I enjoyed the flavor of the consommé as well as the contrasting pairings. 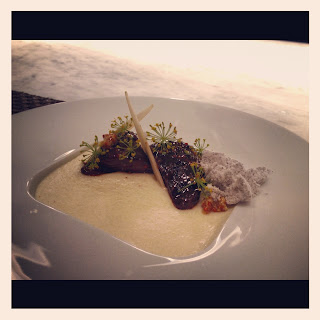 This dish was one of my favorites of the night. It featured an awesome Australian beef cheek with a sweet soy glaze accented with dill and mustard seeds. It was paired with outstanding taleggio Italian grits and a touch of almond oil. To mitigate the richness of the dish, Brad incorporated dill seed, dill flowers, and dill pollen. 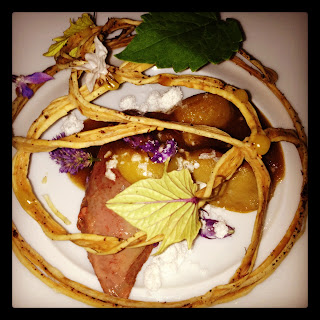 "Squab in its Nest"

Brad explained that squab is one of his favorite proteins to serve. He decided to serve his squab in an edible "nest" with edible leaves on the outside. The breast was cooked sous vide in anise seed oil. The carcasses and legs were turned into a jus that was emulsified with a pickled peach puree. Tarragon powder, butter snap pretzel gnocchi and anise hyssop rounded out the dish. 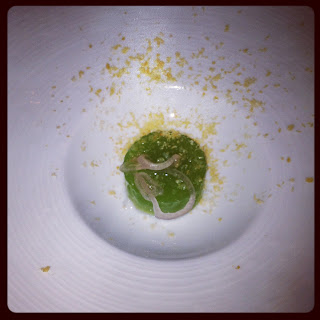 A cucumber gelee, pickled shallots, and almond snow served as a nice palate cleanser before our date with Ms. Piggy.


Anatomy of a Suckling Pig 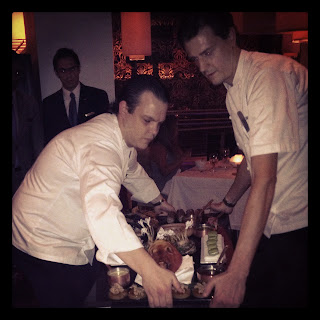 Just when it appeared dinner was coming to an end, Brad dropped an atomic pork bomb on us.

While brainstorming for the dinner, Brad thought it would be fun to "recreate" a whole roasted pig like those you see in the movies with an apple in its mouth surrounded by curly parsley. 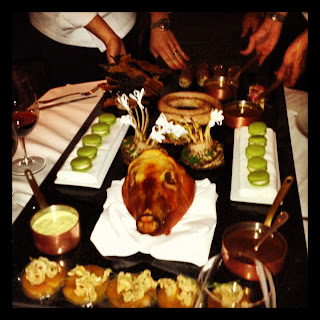 His plan was to deconstruct the whole pig part by part going down the tray where each cut would naturally lay on the tray. It took Brad and his team four days to prep and cook it.

The cuts consisted of:

Tete de Cochon- This was cooked 36 hours, stuffed with pistachios, served with pressure cooked and puffed pigs ears and pistachio vinaigrette. This was prepared by sous chef William Crandall.

Crown Roast- The rack was cleaned and French boned then crusted in herbs and roasted in butter. It was served with a truffle pork jus.

Liver- The liver was soaked for two days in milk then brined for two hours and then sous vide for 35 minutes. It was topped with sherry vinegar glazed artichokes, champagne grape raisins, and finished with a pork foie gras jus. 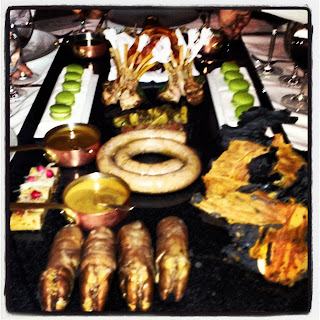 Intestines- Brad stuffed the sausage with 5 different types of nuts and two different apples. It was ground three times, sous vide, then fried in butter. This was served with a butterscotch pork jus.

Leg 1- "Mille Fuille" The leg roulade was cooked for 36 hours with garlic and herbs, dipped in goat feta fondu and layered between zahatar lavash.

Leg 2- Braised in pork jus, shredded then whipped with wagyu beef fat, dijon, and aioli. It is then rolled in daikon radish and seasoned with furikake.

Trotters- The trotters were braised then filled with a duxelle and pork mousse, re rolled then cooked sous vide for 36 hours by chef Crandall.

The anatomy of a suckling pig was awesome and one of the most impressive displays of food I've seen presented at a table. 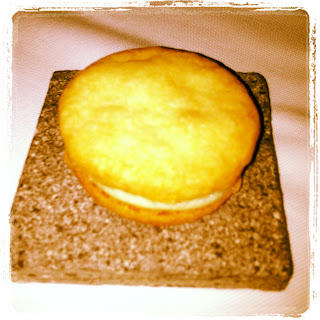 Chef Crandall was responsible for the cheese course. He used aged Vermont cheddar mousse sandwiched between cheddar sables. Yes, this tasted just like a big Cheez-it. 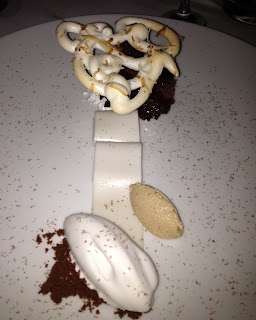 I was stuffed at this point and enjoying dessert was a stretch for me. Brad served a chocolate fudge cake that was glazed in salted chocolate caramel. He paired that with several variations of coconut. Coconut and white chocolate sorbet; spray dried coconut powder; coconut gellan; coconut water meringue and caramelized coconut butter. The salted caramel and the sorbet were my favorite parts.

This was a special and enjoyable meal from start to finish. A tremendous amount of thought and effort went into the entire menu. The anatomy of the pig was as impressive as food gets.

I have a feeling that one day in the not so distant future, my dining guests and I will be saying wow, remember when Brad Kilgore did a tasting menu for just us and now it takes three months to get a reservation at his place....

Brad is a rising star and a future superstar. Enjoy his food while you still can.