In 2010, he opened the now defunct American Noodle Bar where I enjoyed several great dishes, most coming from his daily special blackboard.  His pork belly and spicy melons dish was ranked # 17 on my best dishes for 2010 list which included some serious national competition.  His Crispy Pig's Head Ballotine with Asian pear, spicy mustard and crostini special made my 2011 best dish list.

My co-conspirators and I had discussed doing a Cobaya dinner with him while he was at American Noodle but it unfortunately never came to fruition.  Needless to say, we were very excited to finally get him in the Cobaya kitchen.

Chef Bloise who has an interesting and unique Italian/Vietnamese background is currently executive chef at Sushi Samba, the "sexy and they know it" Japanese/Peruvian/Brazilian restaurant on Lincoln Road. 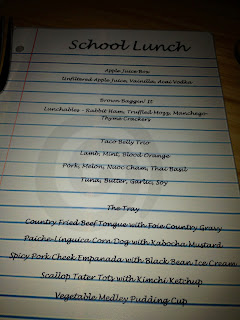 Chef Bloise really put a lot of effort into coming up with a unique and playful menu. He opted for a clever "school lunch" theme and transported thirty guinea pigs back to school a la Rodney Dangerfield.  This was easily the most creative Cobaya to date.  A+  for creativity and effort. 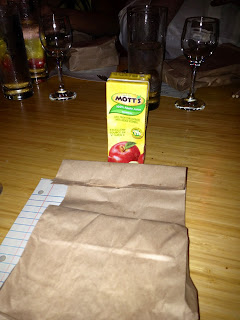 We started the night "brown baggin' it" along with a deliciously doctored juice box.  The box featured unfiltered apple juice, vanilla and acai vodka which we youthfully sipped through that tiny straw glued to the box.  We need to start a petition to keep Chef Bloise away from the Common Threads program... 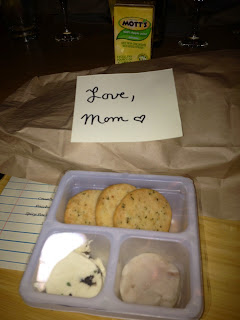 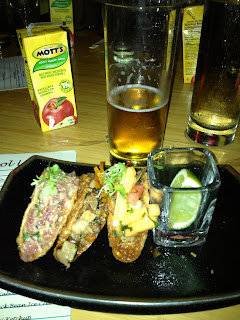 Next up was the Taco Belly Trio which was my favorite overall dish of the night.  This featured three awesome bellies of lamb, pork and tuna.  Chef Bloise knew that I loved his pork belly and spicy melon dish at American Noodle and created a spin on that dish which combined pork belly, melon, nuoc cham and Thai basil. Home run. Accompanying the pork was a lamb belly taco with mint and blood orange and a tuna, butter, garlic, soy taco. All three had great flavors and textures. 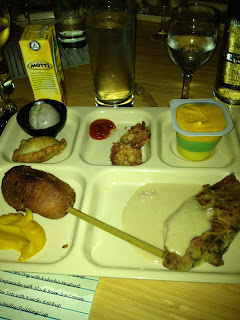 The final savory course featured "The Tray" which contained some big hits and a couple of slight misses.  The scallop tater tots with kimchi ketchup were excellent and should end up on my 2012 best dish list.  I also really enjoyed the spicy pork cheek empanada that was paired with an awesome black bean ice cream.  The country fried beef tongue with foie country gravy sounded better on paper than it turned out primarily because I didn't love the fry and the foie flavor got lost in the mix.  Moreover, I wasn't crazy about the paiche linguica corn dog with kabocha mustard.  I'm not a corn dog fan to begin with and I thought the paiche was overwhelmed by the fried dough. That said, the kobocha mustard was solid and I wouldn't be surprised if some people in the crowd loved this dish.  The vegetable medley pudding cup was another winner for me. It was a fun way to eat your veggies and I loved the smooth texture that took me back to my days as an infant. 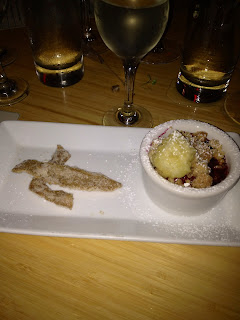 
Just before the bell rang we were served a second dessert which was a sweet version of Spaghetti and Meatballs.  It paired panna cotta noodles, strawberries, cherries and chocolate ice cream. This was a crowd-pleaser for sure but a tad too sweet for me.

Chef Bloise clearly understood the concept of Cobaya and delivered an extremely imaginative and fun dinner. He is a talented and very creative chef who delivers some really kick ass food.   I highly recommend paying him a visit at Sushi Samba.

www.sushisamba.com
Posted by The Chowfather at 9:27 PM