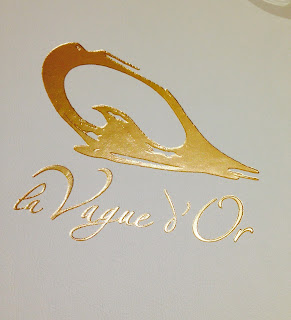 36 year old Arnaud Donckele is one of the youngest chefs to receive three Michelin stars.(at 35) After making a few stops at France’s best restaurants like Michel Guérard’s, Louis XV and Lasserre, the Normandy native has finally settled down at Résidence de La Pinède in Saint Tropez. - See more at: http://www.luxeat.com/blog/la-vague-dor-2/#sthash.lcmtjgkp.dpu

La Vague d' Or is a 3 Michelin Star restaurant located at the Résidence de La Pinède Hotel in Saint-Tropez.

My recent meal was 3 star caliber in every way. Upon arrival we were escorted to a table outside in the pine grove with beautiful views of the Gulf of Saint-Tropez. We enjoyed the cocktail of the day and four rounds of amuse-bouches including an "olive" tree featuring three more delicious bites. More details on that below.

Running the show is Arnaud Donckele a 37 year old chef from Normandy. He earned two Michelin stars in 2011 and added a third in 2013 which he has maintained. Prior to his arrival in Saint-Tropez, he spent several years working for prestigious chefs in France including Michel Guérard at Eugénie-les-Bains, Alain Ducasse at Louis XV in Monaco and the Plaza Athénée in Paris and Chef Jean-Louis Nomicos at Lasserre.

I must admit that although I was excited for my dinner I was prepared to be let down by the hype of the 3 stars along with the glamorous glow of Saint-Tropez. My concerns were unfounded. I was truly blown away by chef Donckele. It was easily one of the best all around meals I've had. His flavors popped and the composition of his dishes were well balanced. He let the ingredients shine and enhanced them with perfect combinations and execution. Service was as good as it gets and the setting was casually formal and sans stuffiness. The sommelier did a wonderful job pairing great local wines with each course and explaining the origins of each one along with her rationale for the pairing. Unfortunately, I did not take any notes or photos of them.

The setting, service and meal were superb.  This is a special place. 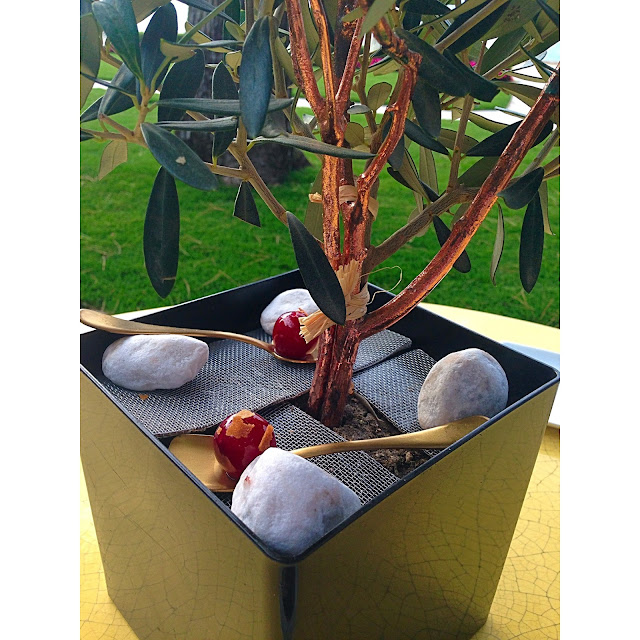 Amuse two was a flavorful combination of Mango and Foie.

Prawn doughnut with sesame and fennel.

The final amuse was a delicious Parmesan and bacon crisp. 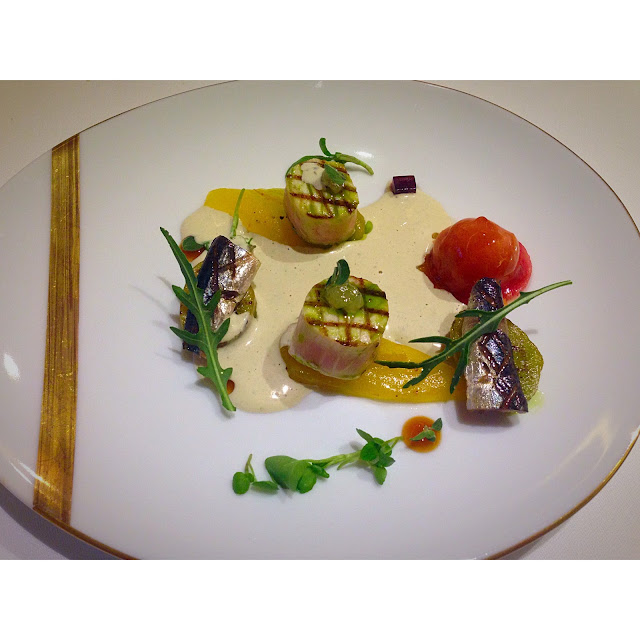 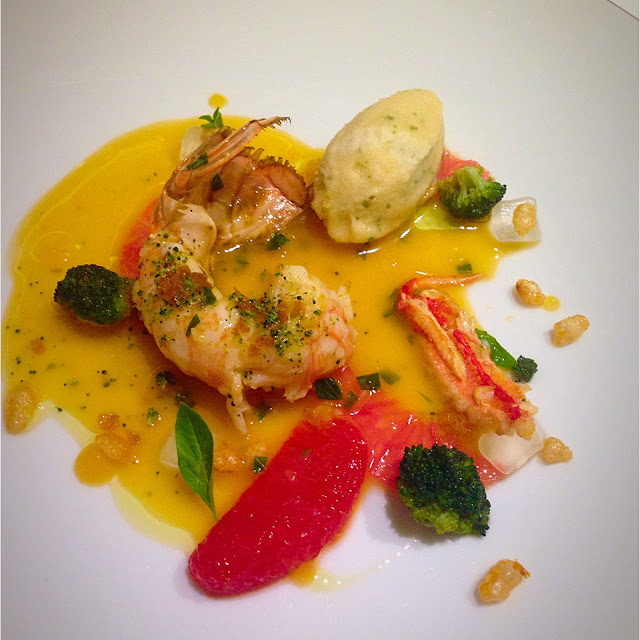 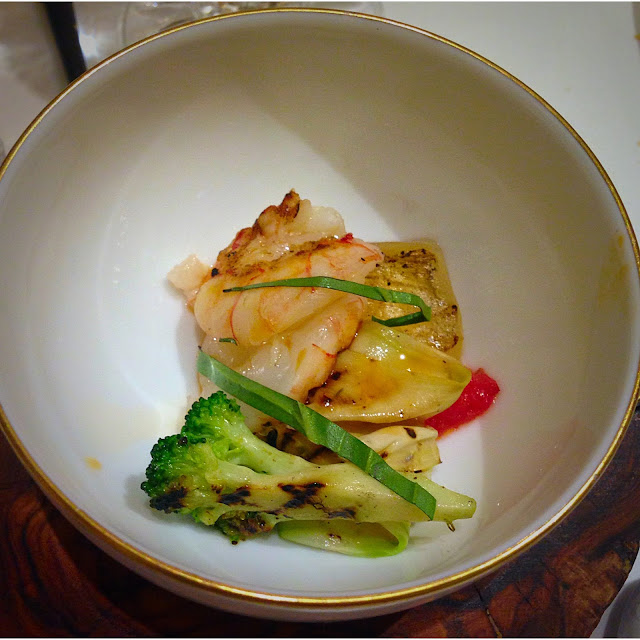 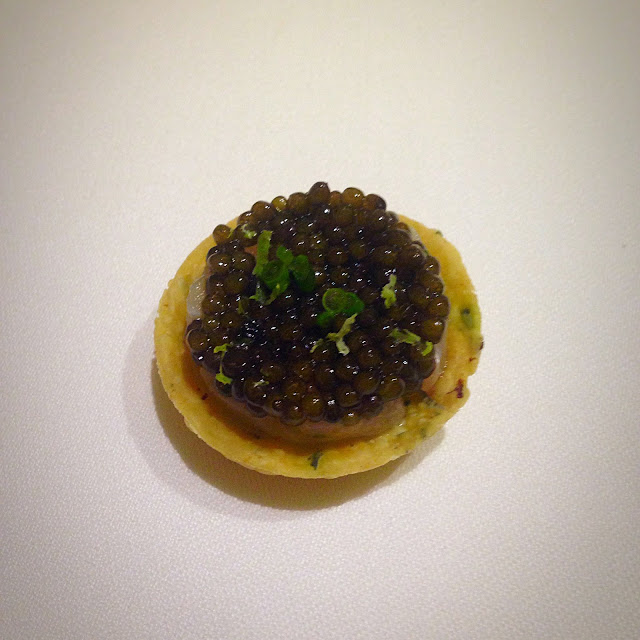 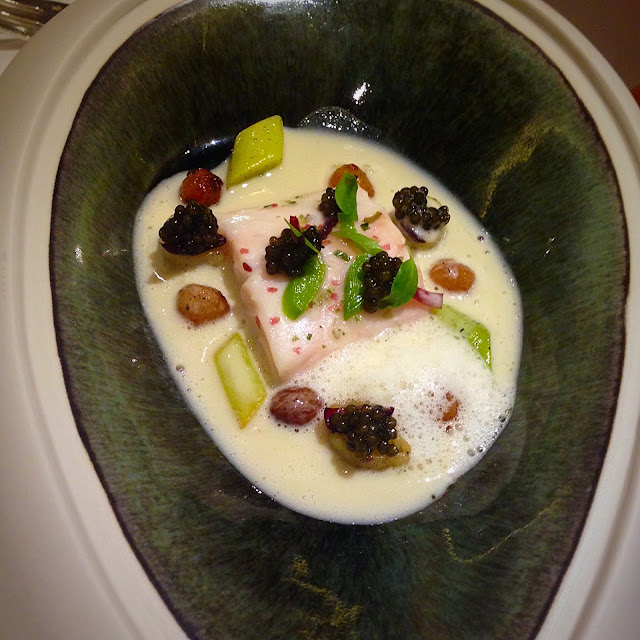 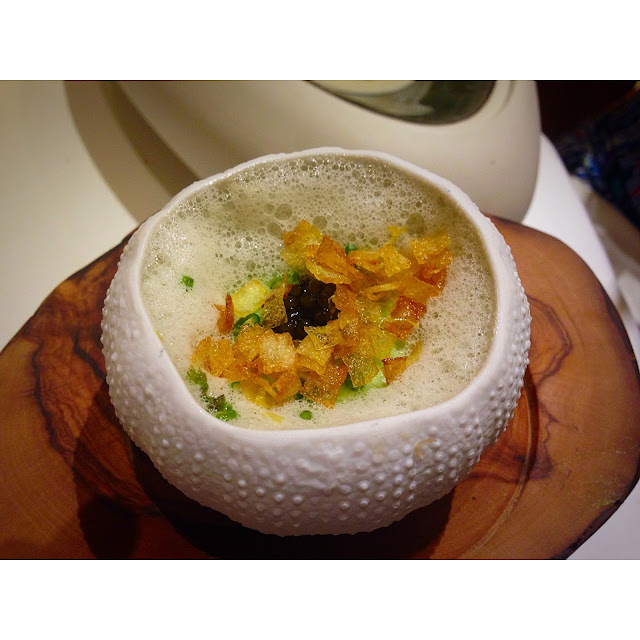 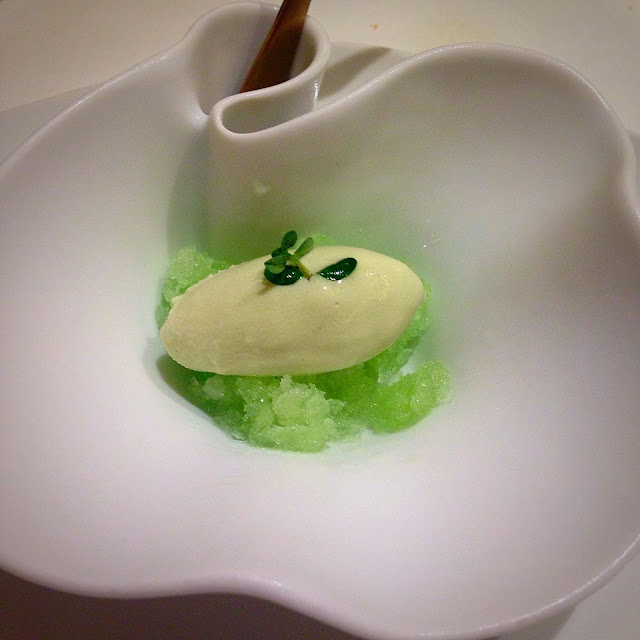 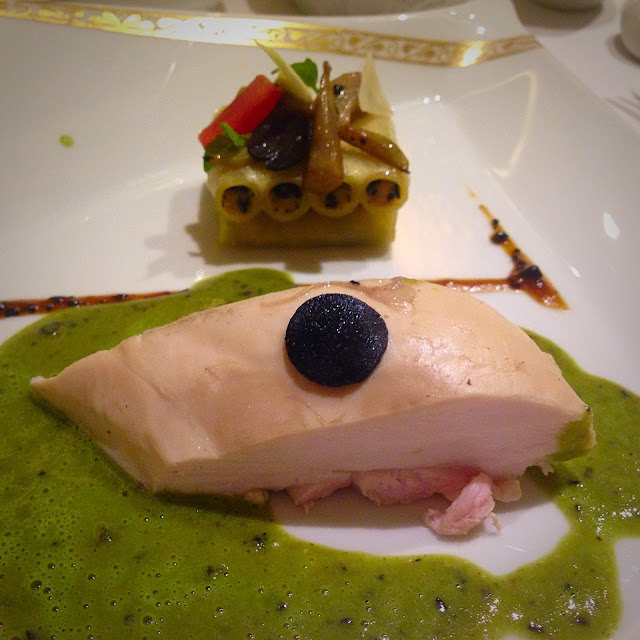 Succulent free range chicken breast, slowly cooked in the bladder with a seasoned broth.
Served with Zitone pasta stuffed with foie gras and truffles, topped with purple artichokes braised with basil.
Patties of thigh meat, wing and aiguillette,
A consomme infused like a tea.
"In honor of a cook who taught me so much" 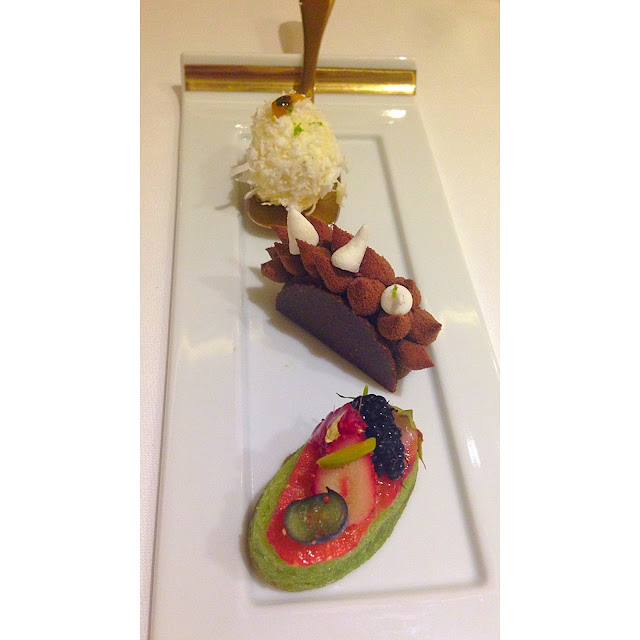 36 year old Arnaud Donckele is one of the youngest chefs to receive three Michelin stars.(at 35) After making a few stops at France’s best restaurants like Michel Guérard’s, Louis XV and Lasserre, the Normandy native has finally settled down at Résidence de La Pinède in Saint Tropez - See more at: http://www.luxeat.com/blog/la-vague-dor-2/#sthash.lcmtjgkp.dpuf
Lemon, fennel and thym ice cream with a splash of absinthe - See more at: http://www.luxeat.com/blog/la-vague-dor-2/#sthash.lcmtjgkp.dpuf