I recently paid my first visit to STK located in the lobby of the Gansevoort Hotel on South Beach.  I've had no burning desire to visit STK but took advantage of what I initially thought was a good offer on Gilt City Miami. Upon further review post purchase, I realized it wasn't a great value.  Nevertheless, I was still looking forward to my visit.

The Gilt City deal consisted of dinner and cocktails for two for $150.00.  It was supposed to include two signature cocktails, Lil’ BRGs and grilled octopus to start followed by a 32 oz. porterhouse for two, one side dish and a custom dessert tasting platter.  However, the custom menu we were provided clearly stated that we were being served a 24 oz porterhouse for two.  Not a big deal for us from an oz. standpoint but it's still false advertising and very lame. Hey Schrager did you "curate" this one?!  Additionally, we did not receive the custom dessert tasting platter. Instead we each ordered a dessert from the menu which was fine but again not really cool.


While we were waiting for our first course to arrive we noticed that everyone else was served a basket of nice looking bread.  Technically, bread wasn't mentioned as part of our deal but you think they would have served us some anyway, right?  We asked, we received and it was great, probably the best thing we had all night.

First up were the lil' BRGs, STK's riff on a big mac.  It was allegedly ** "Japanese wagyu", special sauce and a sesame seed bun. This sounds much better on paper.  They were sad and disheveled looking things that were overpowered by the special sauce. They weren't bad but they weren't special either.  Shouldn't sliders at an upscale steakhouse be kick ass? If not, why bother?  The grilled octopus dish was served simultaneously and was another letdown.  I'm a big octopus fan and this was overly chewy plus I did not love the mango escabeche pairing.

The biggest disappointment of the night was the porterhouse. I usually order a ribeye but was really looking forward to sharing a great porterhouse with my wife.  We ordered it medium rare and it arrived closer to medium. It was tough not tender, including the filet. It was also flavorless, even the strip side. I didn't think a high end steakhouse could fuck up a porterhouse but they succeeded.  Head scratching bad.  Even the side of mac cheese was pedestrian. They should call it mush &amp;amp;amp;amp;amp;amp;amp;amp; water.

On a positive note the bartender in the main room was very friendly and served great cocktails.  The service was actually very good which is always impressive when dining on South Beach.

STK provides a modern take on a steakhouse.  It is a very cool spot and perfect if the scene is more important to you than the food.  However, if you are looking for a great combination of the two I would have to drop it down a few notches on the list. Unfortunately, most nightclub restaurant hybrids fail to deliver when it comes to the food. I guess they just don't care as they continue to rake in the money. Yes, there are exceptions and two come to mind,  n9ne and Tao in Las Vegas. They are clearly on the clubby side but I've had very good meals at both.  So it is doable.

STK takes pride in their slogan ..."not your daddy's steakhouse".  And they are correct; it's no Peter Lugers, not even close.

**-EDITED to add "" around Japanese Wagyu** see comments for more. 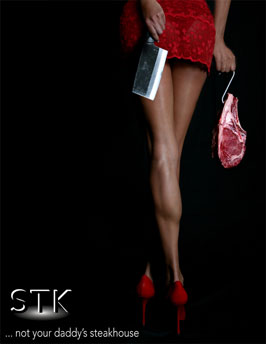 "Japanese Wagyu Beef" is impossible considering that it has not been legal to import Japanese beef since the outbreak of Hoof and Mouth disease in 2010.

You raise a valid point that I neglected to address because of the other issues I had. I must admit that I didn't even notice that they were claiming it was Japanese Wagyu until I started writing the post last night. I just assumed it wasn't Wagyu at all regardless of origin.

After reviewing the menu online I saw that they were still saying Japanese Wagyu and the actual menu we were given (see posted pic) also said Japanese Wagyu.

The Japanese wagyu is inexcusable. There's nothing I hate more than staff who doesn't know what they're serving.
Love the Shrager comment. I'm waiting for a Gilt City event that he actually hosts/attends, not just curates. My co-blogger loves BLT. Personally, I think BLT is far superior, their steak was great.

I think a lot of these Gilt City promotions aren't really deals. They want you to pay for these "curated" special "experiences" that you can only get through them and lead you to believe that they're a great value but I think most of the time you probably can get a better meal at the featured restaurants for the same price or less. Reading your post reminded me of this: http://gothamist.com/2011/08/09/210_veuve_clicquot_picnic_basket_do.php

Shari, the Japanese Wagyu is certainly a topic for its own post. Flat out wrong. I like BLT Steak too but Bourbon Steak is my favorite.

Paula, I knew it wasn't a great deal as soon as I did the math. I was planning on staying at the hotel so I figured it was worth doing. Thought the meal would be better than normal experience. I was wrong...

Lee did not curate this one

Good job. thanks for sharing such a good post.

I'm sure all of these Gilt Town campaigns aren't truly discounts. They really want a person to purchase these Discounted phytoceramide kind of "curated" unique "experiences" that you could simply get through all of them in addition to make you feel that they are a terrific price nevertheless I'm sure more often than not you most likely will get an improved meal at the presented restaurants with the same cost or much less.