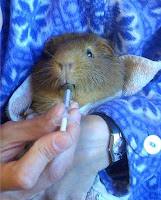 Scene of the Crime: Crumb on Parchment, Miami Design District

Plea: Not guilty by way of temporary insanity for agreeing to host a Cobaya dinner

Sentence:  Multiple injections of truffle butter, the rubbing of  Lee Schrager's belly at the conclusion of  the Burger Bash, the shaving of Colicchio's head on the Top Chef finale (plus the production of Padma's digits to me)

Thirty-four fortunate guinea pigs experienced a first class evening and an outstanding meal thanks to Miami's Top Chef, Michelle Bernstein. I've been procrastinating writing about the dinner because I knew my words would not give it the justice it deserved.  It's also difficult to capture that moment when a plate is served or that first bite. Nevertheless, I will attempt to transport you back to this incredible evening.

I hate to rub it in BUT you really had to be there, it was awesome!!

For the record, I've been enjoying Chef Bernstein's cooking for more than ten years now.  I have fond memories of meals at Tantra, The Strand and Azul. More recently at Michy's, Sra. Martinez, MB at the Omphoy (Palm Beach) and now Crumb on Parchment.  I've also enjoyed watching her frequent TV appearances as Judge on Top Chef and as host of Check, Please! She also deserves recognition for her generous charitable work including but not limited to her work with Common Threads

Before I move on to the meal I would be remiss without thanking Chef  Bernstein for not only taking time out of her ridiculously busy schedule to host a Cobaya dinner but for serving a fantastic meal and providing us with a first class and really special night.  I also want to thank chefs Berenice de Araujo (chef de cuisine-Sra. Martinez) and Jason Schaan (chef de cuisine-Michy's) for their prominent roles in the meal as well as the rest of the kitchen crew.   Additional thanks goes to sommelier Allegra Angelo who poured some great and interesting wines that paired perfectly with each course.  Pastry chef Vanessa Paz for helping conceptualize the dessert courses.   Extra special thanks goes out to Jorge Anaya-Lopez (GM-Sra. Martinez) who helped coordinate the dinner and for making sure it went off without a glitch.  He was also seen hustling around the room throughout the night.

Also notable was the efficient and proper service we encountered.  It was better than what you see in most restaurants around town and even more impressive given the fact that they were dealing with the pressure of a thirty-four person tasting menu.  The etiquette is clearly a reflection on the training and guidance provided by Chef Bernstein, David (Sr. Martinez) and Jorge.

Additionally, the pacing of the meal was perfect which is not an easy task when serving a tasting menu for a group that large.  We were done in about two hours which is a Cobaya record.

Another highlight of the meal was being able to see Chef Bernstein plate each course table side at various stations.  This was an added treat and one that we all enjoyed.


I'm a big fan of oysters, scallops and uni so the first course hit a
sweet spot and was a real treat. The oysters were paired with a chawan mushi (Japanese egg custard) and topped with enoki mushrooms and green onions. The oysters were great and the combination worked well.  This dish also included a non-traditional scallop ceviche topped with uni. What more needs to be said? It was fantastic. 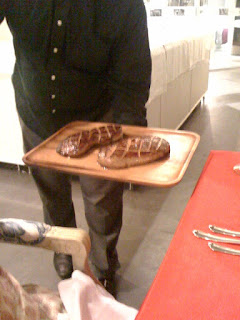 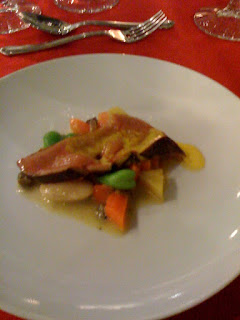 Course two featured another one of my favorites, foie gras. I almost fell out of my chair when I saw the tray of whole roasted foie gras pass me on its way to the carving station.  It was cooked sous vide then quickly seared. It was a beautiful site. Chef Bernstein sliced it table side via an electric knife and paired it with turnips, carrots, fava beans and a light carrot-orange sauce.  The foie was outstanding and the vegetables held their own making this an incredible dish.  I was unfamiliar with the wine selection but thought it paired perfectly.  I loved the first course but this may have been better.

Next on the docket was another winner. The Chupe de Mariscos featured a sous vide cooked shrimp, an Amazonian fish called paiche, mussels, purple potatoes and a fried quail egg.  I enjoyed each component but the melt in your mouth paiche was the standout for me. Even better was the broth that was packed with flavor and a nice spicy kick. I was tempted to pick up the bowl and suck it all back...  Oh wait, I almost forgot about the ridiculously good black squid ink risotto croquetas which were accompanied by a saffron aioli.  These may have been my favorite bite of the night.  Allegra paired this with a very nice pinot noir that worked well with the broth.  This was an tremendous dish all around. 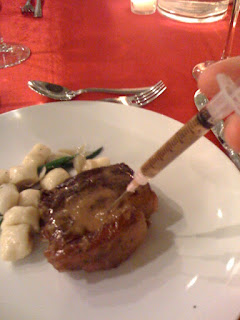 The last savory course was probably my least favorite of the night but that is only in comparison to the first three.  That said, it was easily the most fun. We were served a plate that consisted of a NY Strip Steak cooked sous vide with truffle butter, gnocchi and a syringe. Yes, a syringe which was filled with more truffle butter.  After Chef Bernstein instructed us on how to inject our beef,  I immediately blurted out "Dr. Martinez and the botox steak".  I enjoyed the creative nature of this dish and there was a buzz in the room during this course from start to finish.  The gnocchi was cooked perfectly and complimented the steak.  I was unfamiliar with this wine as well but enjoyed it.

Next up was a very refreshing and palate cleansing calamansi soup which we poured over a raspberry, pineapple and mint ice cream. It was a nice change of pace.

The last weapon was a banana tarte tatin.  Sounds simple, right? Guess again. This dessert bomb consisted of a chocolate pastry topped with bananas, salted caramel foam and nutmeg ice cream. It was topped off with awesome chocolate pretzels.  I enjoyed watching each chef step up and contribute to the preparation of this dish one by one.

This was a fantastic evening in every way from start to finish. We are very fortunate to have a national celebrity and talented local treasure cooking right here in our backyard. She successfully incorporates classic and modern techniques and never forgets to blow you away with interesting preparations and flavorful dishes. She's Miami's own and She's a Rock Star.

Posted by The Chowfather at 2:35 AM

Anon-it was great.
Food & Wine- thank you. You need to attend one