Blue Collar recently opened in the old American Noodle spot on Biscayne Blvd. in the Upper East Side of Miami.  It is owned and operated by Chef Allen veteran Daniel Serfer.

It was love at first site for me after seeing the menu posted on their website.  The Big Ragout Sandwich had my name written all over it.  The Shrimp and Grits, Pork and Beans and Chanukah Latkes also turned me on. 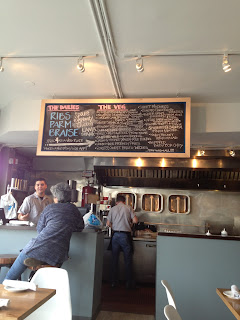 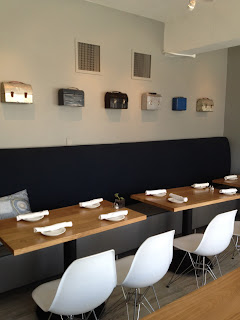 The simple, clean and modern decor features lunchboxes mounted along the walls. 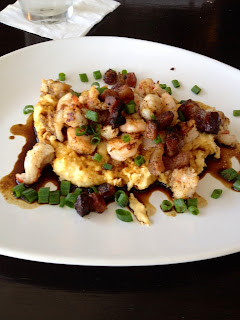 The first dish I tried was the Shrimp and Grits.  Chef Serfer's version features a generous portion of fresh, perfectly cooked shrimp.  They were accompanied by bits of bacon and New Orleans style, (think Worcestershire sauce) bbq sauce.  I would defer to my Southern friends regarding the grits although this Yankee ate his fair share while residing in New Orleans and I liked the texture of these.  This was a very nice overall dish and one of the best versions I've had in Miami.  That said, the KING of bbq shrimp in Miami is Kris Wessel and Red Light. 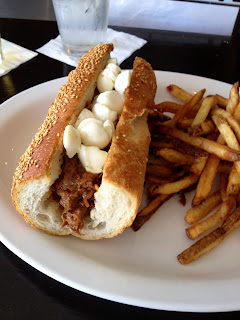 Next up was The Big Ragout sandwich.  This monster of a sandwich features pork and veal shoulder, brisket and is topped with fresh mozzarella. It's served on semi hollowed out bread that is made specially for The Big Ragout.  Bread can really make or break a sandwich and this bread was fantastic. It had a really nice chewy dough with a nice crisp outside that supported the "ragout" perfectly.  This is a large, heavy sandwich that I admittedly had a hard time finishing post shrimp and grits.  Nevertheless, I did and I really enjoyed it.  It reminded me of the debris sandwich I love from Mother's in New Orleans. A side of some of the extra juice would really elevate this to an off the charts knockout sandwich.  Regardless, this will be on my short list for Super Bowl meal options.  I also liked their fries which were perfectly seasoned with a nice crisp texture. 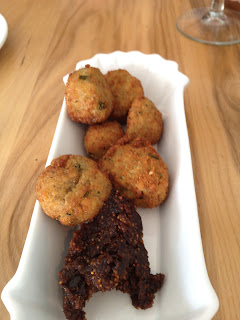 After enjoying my first meal I paid a second visit a couple of days later with Chow P.  She ordered a veggie burger with bacon. Hilarious!!  First up were Wild Mushroom and Goat Cheese Croquettes paired with a pomegranate fig jam. The croquette combination was perfectly proportioned resulting in a very nice bite. I'm sure these will be a hit. 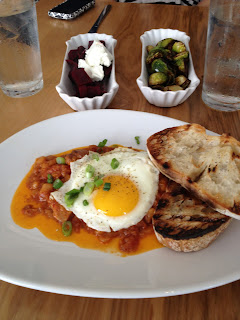 Next up was a dish I really wanted to try on my first visit, the Pork and Beans.  This was a hearty dish that combined smoked bacon, sausage and white beans topped with a fried egg.  Dangerously good.  We also sampled the beets and brussels sprouts which were fine but nothing special. 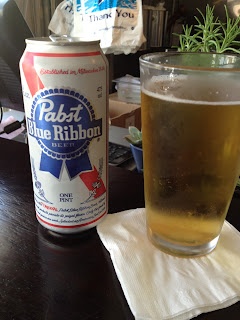 Dessert-you can never go wrong with a $3 pint of beer.

Blue Collar is a small, laid back neighborhood spot that features solid comfort food prepared by a chef who is stepping down in restaurant "class".  That's a nice combination and a welcome addition to Miami.